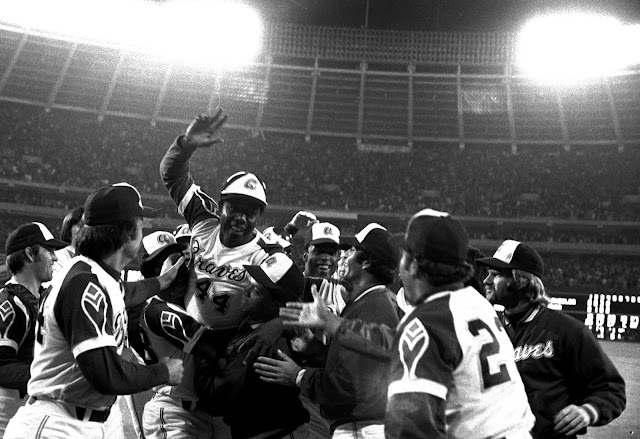 1. Hank Aaron - The world lost one of the greatest athletes ever, but much more, an even better man. Aaron represented the best of us and exemplified what America is capable of beyond the ugliness it held, and continues to carries. His career accomplishments are extraordinary, and his lasting grace will endure forever. Thanks for being better, Mr. Aaron.

1A. Larry King - While reeling from the news of Hank Aaron, we learned that Larry King left us as well. A pioneer in cable news and journalism, King leaves behind a unique style and tons of memories.

2. Lloyd Austin - Austin was appointed and confirmed as Defense Secretary under the new Presidential administration. Austin is the first black Pentagon Chief, which is pretty cool. And also, a reminder that there are still so many doors yet to be broken down.

1. Coronavirus - I try to leave COVID off the "down" list as much as possible, because, well - obvious. But, as a nation, we have just surpassed 25 million cases. 25 million! With continuing grim situations out west and still waiting on ample vaccine distribution, we're still not close to getting out of this thing.

2. Political Narratives - There was something so phony about the way the narratives of cable news networks suddenly switched this week following the inauguration. We got the huge piles of hyperbole from left-leaning networks, and then the crazy, irrational criticism from right-leaning networks. The administration is literally a week old!

3. 1776 Commission - On the way out, President Trump's administration unveiled his response to the 1619 Project. Before judging, I gave the commission a chance by reading it and as expected, it's filled with unverified and fluff history... as expected. It just read more like a political response more so than an actual educational blueprint.

1. Amanda Gorman - She was absolutely amazing at the inauguration. Oh yeah, her books are now #1 and #2 on Amazon. That's really cool.

2. Sarah Thomas - Thomas has been tabbed to serve as a referee for the Super Bowl, making her the very fire female referee in Super Bowl history. Women continue to crush barriers...yes, also really cool.

3. Bernie Sanders Memes - They haven't gotten old yet. And there are some very creative ones out there.