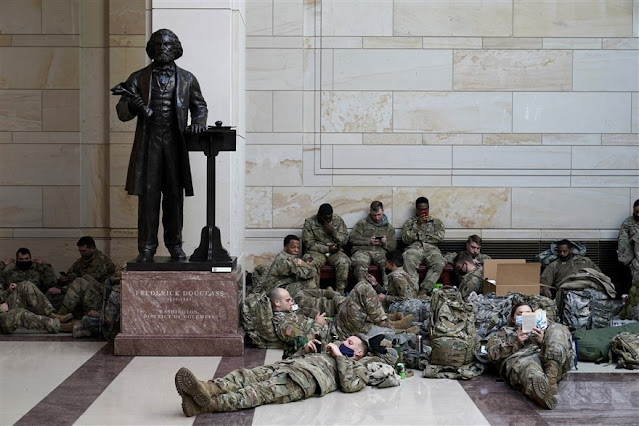 1. National Guard on Capitol Hill - The country is still reeling from what happened at the Capitol last week. As more and more details surface regarding what took place, the ramifications are seen in the preparations for this week's upcoming Biden-Harris inauguration. The most striking photo was that of the many men and women sleeping in the halls of government buildings.

It's just a great reminder of the sacrifice and effort that often is thankless by those in our military. It's also a reminder that even as a country that bestows love for our military, WE have placed them in unnecessary situations like the duty they must serve this week.

Regardless, God Bless our Troops, everywhere.

2. Flint, Michigan Charges - Several Michigan officials have FINALLY(!) been charged with their role in what has been - and still is - one of the worst human-induced environmental occurrences in U.S. History. The people of Flint, Michigan are asking for clean water - that's it! This has been long overdue, and by no means is it finished.

2. New Mississippi State Flag - So Mississippi doesn't need the Confederate flag in their state flag? Huh, imagine that! After the NCAA threatened the state following this past summer's unrest and reflection, Mississippi quickly pulled their old flag, drew up a new one, and is forging ahead. Easy, peasy! It looks great, by the way.

1. Domestic Terrorism - The continued unpacking of the Capitol Riots/Terrorist attacks has been eye-opening to the long-time, unspoken fact from the FBI, that the greatest domestic threat to the country are those radicalized by white supremacist teachings. It's been evident in the riots, the planted bombs, and more just this past weekend. Much of what we demonize overseas terrorist groups for doing - the preying and radicalization of those in fear, the martyred sacrifice for false leadership, the belief of "necessary" violence, and more - is prevalent right here in the United States within these groups.

2. Death Sentences - The number of death sentences carried out over the last couple of years is more than the total over the last 56 years! We haven't had a federal execution in 17 years! Regardless of your thoughts on capital punishment, that astronomical total is striking and troubling.

3. Coronovarius - The grim reports out of California are still troubling. We're so numb to death that it is sad. 400,000+ individuals are dead, with many more grieving. Still unfathomable.

Trump's Second Impeachment - Soooooo, President Trump made history as the first President to ever been impeached twice. He holds half of the total Presidential Impeachments, this one going down as the most bipartisan impeachment of them all, and is leaving office with the worst approval rating of all-time - 39%.

Yet, I'm still unsure what to make of all of it. I don't think we'll be able to completely unpack the impact of Donald Trump on our country for at least five years removed from his Presidency.