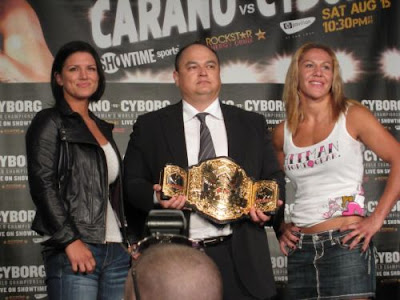 Every few years we witness an event that will undoubtedly make history, and create a change for the journey ahead. Saturday, August 15th, 2009, Gina Carano and Cris "Cyborg" Santos will help create an inevitable change in female sports. The two prized fighters will meet for the first time ever to crown the first ever female mixed-martial arts champion in any class. A fight that is primed to not only be a great one, but that will finally cement women's MMA in the sports realm, and in the fighting world.

As the two greatest and most recognizable female mixed martial artists in the world, both Carano and Cyborg are scheduled to be Strikeforce's main event. With Dana White and the Ultimate Fighting Championship currently not recognizing women's MMA, Strikeforce has an opportunity to display something different to the MMA world this Saturday. Carano and Cyborg, and often times other various female MMA fights often steal the show on many cards, and to be quite honest, this fight might be more intriguing than Lesnar/Mir from UFC 100.

Carano, the face of women's MMA, and justifiably so, brings many qualities in her fights. Not only is she very attractive, but she brings a charismatic approach and "Rocky-like" effort to each and every one of her fights. She is tough, methodical, and athletic. Add to that the machine-like aggressor that is Cris Cyborg who has been heralded as the greatest pound-for-pound female mixed martial artist, and Strikeforce has an opportunity to change history in a dramatic way on Saturday.