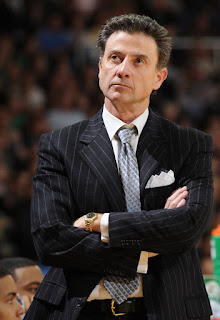 After the entire situation that unveiled itself this week, everyone knew no matter what events, details, or facts that followed, Pitino would sustain his position. We've seen it over, and over, and over, and over, and over again. As much as college basketball purists want to continue preaching on their soapbox about the preserved, "love of the game" in college athletics, this situation once again proves that the amateur athlete is dying. The coach as an educator is dead. And that collegiate sports and athletics on the division I level are as much about business as the pros are.

What Rick Pitino did as a man was unconscionable to his family, children, and the players and students that has played for him. As the details continue to work themselves out, the core facts that he cheated on his wife, and helped fund for the abortion of his unwed child remains the issue.

If person X, was selected to help mold young adults in the most important and impressionable time in their lives, was caught in a public scandal that brings reputable damage and questionable character flaws (abortion) in the south, would he still be employed?

Probably not. Any other coach would be shown the door. As for a professor? They wouldn't have a chance.

However, in this situation, person X happens to be Rick Pitino. The same Rick Pitino that, to his credit, helped rebuild Louisville's basketball program, and brought in a considerable amount of revenue to the university.

The University made their decision on that fact, and that fact only. And their lies the problem.

Never should there be a calling for an individual to lose their job, but when an educator (and I use that term loosely) is wrapped up in such a scenario which is compounded with an extortion case, isn't that grounds for dismissal, or at least temporary leave of absence?

Universities and colleges are slowly moving from a focus on the student experience as an educational institution, towards performing as a business. It's about the bottom line. Just like the pro sports leagues. Coaches do not honor contracts, and leave on a whim for other positions when they desire. Now they do what they feel in regards to illegal and immoral activity without any accountability because of how many wins they attained last year.

And to be honest, after Pitino's latest scandal, can you blame them?