Finally On The Same Page With UFC President, Dana White


After all, White does more flip-flopping, trash talking, irrational, and unnecessary comments as your typical “flip-flopping, trash talking, irrational, and unnecessary commenting” individual. As the President of the UFC, White embodies and exuberates the confidence in his promotion as the number one Mixed Martial Arts organization in the world.

He’s bold, he’s brash, and he speaks his mind. But that’s why I am so intrigued by him as well. I enjoy different opinions, and White often offers his.

However, for the first time, not only did I enjoy a comment made by White, but, I whole heartedly agree with him as well. 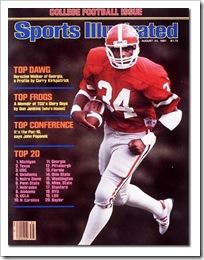 Herschel Walker, 47, is still in great shape, and is now a sixth degree black belt as he continues his studies in martial arts. However, many question the credibility of the signing. At last month’s Carano vs. Cyborg fight, Walker was interviewed, and stated he was interested in fighting. the statements were taking by many amongst the MMA community and general public as just chatter. However, chatter is now a reality, and Walker is on board with Strikeforce.

Strikeforce, which has now partnered with CBS, Showtime, and ESPN2 to help the promotion compete with the juggernaut Ultimate Fighting Championship, is excited about the deal. In fact, so is Showtime due to obvious interest purposes, and so is ESPN, who has been eager to enter into the MMA market for sometime now. Strikeforce has been slowly gaining momentum over the years with great events, huge roster signings such as the best fighter in the world, Fedor Emelianko, and an attraction that cannot be seen in the UFC, in women’s MMA.

“I think it’s ridiculous. People think we're anti-competition? We're anti-dumb competition. Doing stupid things like this, putting a 50-year-old guy in the Octagon for the first time, and then going out there putting out press releases like it's a big deal because you signed a 50-year-old Herschel Walker? Are you serious? Strikeforce is a small, little, regional show.The geniuses over at Showtime, these guys are the most arrogant, cocky, pompous jackasses I've ever met in my whole life. Which athletic commission is going to let this guy fight? Who the f**k are they going to find to fight Herschel Walker? A guy in a wheelchair? It's completely disrespectful to the sport."

Now remember, this is the same guy that jumped all over Strikeforce for its marketing of “internet sensation” Kimbo Slice after only two fights, and using him as the headline and main event for MMA’s first nationally broadcasted event. An event that was crucial and detrimental to the sport at the time (Slicing The Integrity of The Sport: A Review of MMA’s Big Night). It’s also the same guy who refused to offer opportunities to former professional wrestlers, or be linked with professional wrestling.

Well, it is the same guy who recently signed Kimbo Slice to help save ratings for the tenth season of The Ultimate Fighter. Also, the same guy that cross promoted with Total Nonstop Action Wrestling (TNA) and signed his future heavyweight champion and biggest star in former WWE superstar, Brock Lesnar.
So White isn’t exactly Mr. Crediblity himself. Yet, White is on to something with the Strikeforce signing of Herschel Walker. MMA is in a crucial time in it’s existence as it teeters on remaining, “The world’s fastest growing sport” and knocking down the door into mainstream sports. Gimmick signings, although would provide short-term interest, is not healthy for the sport, the industry, or its reputation.

But really, what athlete has begun a new sport at the age of 47? Any sport? Much less, one with the physicality and risk for injury such as mixed martial arts.

And finally, here goes, the statement yours truly absolutely, one hundred percent agrees with, “It’s completely disrespectful to the sport.”

It couldn’t have been said any better.

I understand at some point, all sports must embrace the entertainment value to continue operations, evolution and enhance business, but having your first fight at forty-seven years of age is the kind of unhealthy interest where the risk and damage is greater than the payoff.

For once, Dana White is correct. And yes, I agree with him.