No Debate When It Comes To Being Phenomenal 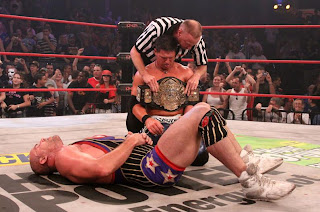 Over the last few years, there has been a great deal of pessimism running through the wrestling industry. From the lack of serious competition, deaths, various arrests, and finally admitting the wrestling boom period of the late nineties and of this early decade is over, the industry has taken many hits, or shall we say, body slams.

Nonetheless, through it all, and as it always has, the business continues on. In fact, we have seen the emergence of a solid number two company, a possible number three (Ring of Honor), a growth of interest in international companies (Dragon Gate & NOAH), and the emergence of other independent organizations.

Yet, with the advent of the internet and the growth in opinion due to blogs, advanced reporting, and instant communication; debates, differences, suggestions, and sheer, "know it all" gestures surround the varying aspects of the wrestling industry.


However, at last night's TNA No Surrender Pay Per View, a moment occured which many fans all agree was a special moment - AJ Styles becoming the new TNA Heavyweight Champion

Yours truly has followed many, many, many wrestlers over the course of this lifetime, and those of the very distant past. Over the years, I have had the oppurtunity to see many great wrestlers step into the ring. Over those years, I have come to appreciate the art of the industry, as well as the skill, athleticism, and showmanship that professional wrestling demands.

Over that time, I can say I have never seen a wrestler the likes of AJ Styles.

Many wrestlers have come through the business, became big stars, and eventually faded away. Their time in the business, although succesful, lacked a factor of loyalty with it.

AJ Styles, a young wrestler on the independent scene that was so amazing at his craft that he eventually earned himself the moniker, "The Phenomenol One." As an upstart company in the summer of 2002, Styles became one of the first talent acquisitions the company made.

Over the years, Styles has given TNA fans various memories due to his unbelievable athletic ability and athleticism. As a rare talent, Styles has bypassed various oppurtunities to become a part of the WWE, choosing to help build TNA, an action that has earned him respect with fans, and his peers. In addition, Styles is highly regarded as TNA's only grand slam winner, and is considered to be the heart of TNA. Some would go as far as saying he is TNA.

With all of the above compliments, is there any doubt of why Styles is universally supported and respected?

And for all wrestling fans, it was a true special moment. Finally, to see a guy earn the bearer he truly deserves atop the mountain. Over the last seven years of watching AJ Styes pay his dues, come into his own, and make a name for himself, it was a great payoff for everyone. No debate, a moment for which everyone agreed on. No doubt, a moment everyone knows he deserves.