Music Takes Back Seat (Once Again) at VMA's 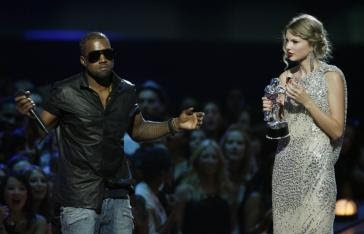 After taking a year off from controversy, the 2009 MTV Video Music Awards were right back at it, and it didn't take long for the train wreck everyone anticipated to occur. An event that is notoriously known for its emphasis on fashion, rivalries, drama, and creating edgy television to go along with its programming, MTV got its wish in the so-called "Kanye West Invasion".

West, always known for his outspoken ways (even when not appropriate or relevant) interrupted the show (or made the show, however you look at it) when he insisted on letting the world know during Taylor Swift's acceptance speech (Best Female Video) that he thought Beyonce's video was "one of the best of all time".

Classless? Without a doubt.


West for years has made headlines and news for his bold, and somewhat arrogant ways. There are times where West's actions harm him from truly gaining the respect he deserves for his work. However, you cut it, West is one of the greatest music producers of this generation. He knows his stuff, and every artist that works with him knows it. Add to it his ability as a producer to actually create hit albums as an artist, and West is a rare breed.

A talent that does indeed push musical creative boundaries. Unfortunately, West pushes and crosses other boundaries which aren't as admired in basic social concepts.

West's actions were inexcusable. Public speech, and the freedom of opinion is highly appreciated amongst yours truly, as is evident, but there is a place, a time, and way to present your opinions. On stage during someone's moment? 0 for 3. Not the time, place, or way.

Whether reports of his intoxication during the event are true or not, West should finally be held accountable by music lovers and society. An apology on Twitter is not acceptable either, nor is it relevant. Taylor Swift had a moment removed from her experience based on arrogance, ignorance, and a sheer lack of self-discipline.

However, like the once volatile Reggie Jackson once said, "Bad press is better than no press." And as classless as the action may have seem, MTV, Beyonce, Kanye West, and Taylor Swift all win from a scenario that seems so familiar to professional wrestling.

And on this morning, as Beyonce grows in the hearts of Americans, Taylor Swift becomes an even larger star, and Kanye West becomes the bad boy of the industry; MTV is the biggest winner here. For the VMA's are "back". In addition to the West/Beyonce/Swift saga, the night featured a tribute to Michael Jackson, Lady Gaga's very "different" outfits and performance, Pink dangling in mid-air, Russell Brand's inappropriate jokes, and Lil Mama randomly appearing at the end of a Jay-Z/Alicia Keys performance.

Yes, it is indeed back. Lights, cameras, big stars, big show, and most importantly...controversy.

How ironic (and credible), for an entity who no longer air music videos.