Why did Derrion Albert Have To Die?

All schools were violent. This is one of the sure things I believed several years ago, when I, myself attended High School. I was pretty sure that most High Schools across America dealt with the same issues such as violence, gangs, and slumping graduation rates. In some form or another, I felt that the typical high school that was displayed on television with the perfect teachers, various extra-curricular activities, and huge hallways did not exist. I always felt like those high schools, where the biggest problem revolved around prom themes and graduation venues, were indeed fiction.

After closing the door on my high school chapter, I was able to experience various other high schools. Those of which my now college friends had once called theirs. As per usual, the grass seemed greener on the other side. With beautiful campuses, supporting communities, various opportunities, and yes, NO metal detectors upon entrance, it seemed like the proverbial TV high school. Maybe that was the school, right? Maybe most schools are like this, and I just happened to attend one of the bad apples.

Wow, was I wrong.

The high school, although beautiful, rich, and filled with head starts many other education centers I knew of did not have, was riddled with a drug abuse situation. One that until this day, I don’t believe has been curtailed.

Yet, as I sit here punching the keys today, I am reminded of the above scenarios, thoughts, dwellings, and lessons after reading of the death of Derrion Albert.

Derrion Albert was the victim of a large fight outside of a Chicago school which left him dead after being viciously beaten. After reading reports and responses, I am left stricken for thought on the matter. When will this end? And to second the statement written in an article by Maureen Downey, why exactly did Derrion Albert have to die? 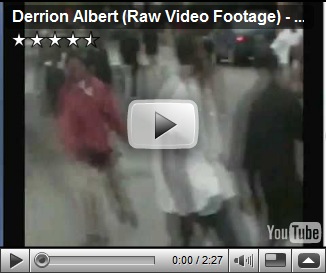 It almost seems answering the question with that of a shoulder shrug does it more justice than attempting to pile together a fallacy-filled response.

Too many times we place this on the shoulders of the black community. It seems easier that way. Blacks are in inner-cities. That’s where most of these schools are and that’s that. Well, it is the problem of the black community…and the white…and the Asian…and the Latin and yours, and mine, and all of ours. As I said before, this stuff occurs everywhere, and it’s time that we, as a society, stop pointing fingers, and start creating solutions.

The scene in the video that showed was an image that I too, and many other children have seen in their schooling experience. The many riots, gang jumpings/initiations, stabbings, and fights that resemble the chaos that took Derrion’s life.

And as all those images comeback, and after all that I managed to put on this screen, the one question that remains deep in my thought is, why did Derrion Albert have to die that way?

Why did/does anyone have to die that way?

And most importantly, is this problem rooted? Or just the way man, and human nature is?

Yet, the comments made by the Reverend Michael Pfleger at Derrien’s funeral may provide some help for someone who may. He stated:

“What kind of person, what kind of individual, has such rage and such anger and such madness. We’ve got to get to the hearts of our children, because nothing, nothing, excuses or justifies the actions of an individual who would beat another individual. Nothing justifies that in this society.  It’s time for guns, and it’s time for two-by-fours to stop being the way we treat each other.”