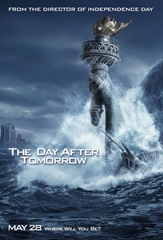 After a climatologist warns global leaders and officials of the pending dangers and damage of global warming, he must save the world from it’s sudden arrival, all the while rescuing his son from the inevitable new ice age.

When the temperatures suddenly change, Americans learn of the global warming phenomenon by the destruction of Los Angeles. The scene saw various tornadoes ripping apart buildings, causing havoc, and creating fright in the city.

Favorite Quote
After the ice age transformation is complete, astronauts look down on the earth from space and state, “Have you ever seen the air so clean?”

The Day After Tomorrow was an interesting flick that captured the ability to be entertaining, interesting, and educating while being very political in its message. It’s message, surrounded by the dangers of global warming, seem to be based off of Al Gore’s documentary, The Inconvenient Truth. Like Gore’s documentary, it creates concern in the viewers mind over the haste use of the earth’s resources, the well-being of our planet, and strong interest over global warming reports – whether its authentic or not. The mass rush towards third world countries for refuge also created thoughts not on environmental concerns, but international affairs as well.

Besides its very political message, the film is very well done in presenting the dangers of global warming in an easy way without being scientifically excessive. The visual effects and scenes of tornadoes in California, flooding in New York City, snow in New Delhi, and huge hail in Tokyo were impressive, and Dennis Quaid did a great job in his role.

All in all, The Day After Tomorrow is a great film with cause, information, and entertainment. Highly recommended, especially after The Inconvenient Truth.