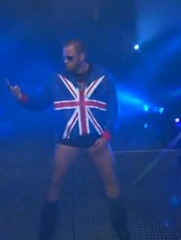 Nigel McGuinness is now a member of the Total Nonstop Action Wrestling Roster. Set to debut on tomorrow tonight’s edition of iMPACT, McGuinness will now go under the name of Desmond Wolfe. McGuinness err…Wolfe is one of the best kept secrets on the wrestling circuit, dominating the reigns of Ring of Honor (ROH) wrestling, and impressing international hotbed crowds such as Japan, with a flair of charisma and arrogance.

Since the days of the Monday night wars, and the wrestling boom period of the late 90’s and the earlier part of this decade, wrestlers and free agency were a hot topic amongst wrestling fans. Who was going where? Who would resign? Surprise debuts, and sad farewells. The busts, the surprise signings, and all the evaluations that comes with free agency. It seems lately, things have opened up. Wrestlers have options once again (though not as equivalent as in the past), and fans are excited to see some different options.


Wolfe along with other top free agent talent, Bryan Danielson (and my selection for wrestler of the year in 2007), agreed in principle to contracts with WWE, and were expected to debut soon. However, Wolfe, who unfortunately suffered several concussions in the past few years, did not pass his pre-screening physical with the WWE, thus leaving the door open for him to sign with TNA. The move definitely caught everyone by surprise, and has TNA fans, and McGuinness…err Wolfe fans very excited about the possibilities. However, most importantly, the defection and move has stirred up the free agency scene in professional wrestling, and brought back a level of excitement that wrestling fans have missed.

With Danielson moving to WWE, Booker T heading into free agency, the mysterious status of Mr. Kennedy, and Wolfe’s debut in TNA tomorrow tonight, a little part of that time came alive again. That element of surprise. That excitement. Something very difficult to recreate in our microwave society of available information. It might not be the same as the boom period, but it does shake things up a bit. And that is something professional wrestling in North America desperately needs.