It’s been a long time since yours truly has mentioned his beloved New York Knicks. After all, there hasn’t been much controversy, wrong doings, and head scratchers which spur and fuel various rants. With the new era being spearheaded by Donnie Walsh and Mike D’Antoni, much of those rants have been silenced as the organization looks forward.

Nonetheless, it is a new season. A season where the culture under this new management has been in place for a year, expectations are known, and the future is one year away. Otherwise known as the Knicks “hump year” before the madness that is 2010, the Knicks must ensure that progress is being made for themselves (those with expiring contracts), for management (Walsh and D’Antoni) and the free agent class of 2010 (Lebron James and co.)

However, much like the team will attempt to do this year, I also, will try (but can’t guarantee) to leave 2010 speculation for another time, if not, at the end of the season. For the NBA season opener is about one month away, and it seems for the Knick fan, there is light at the end of this long, dark tunnel.

This year, the Knicks have an opportunity to turn some heads, and maybe shock some experts with an impressive 2009-2010 campaign. After viewing the opening pre-season game versus the New Jersey Nets, there are five keys that I believe will shape the fate of this season’s New York Knickerbockers.

1. Team Defense – There is no secret that last year’s team was dreadful on the defensive end. Teams scored at will, and the Knicks seemed to not be interested in the concept. Coach D’Antoni stated he might have contributed to that by emphasizing and establishing his seven seconds or less offense with little mention of defense. This year, camp is surrounded by the notion of defense. The Knicks can score. We know that. They led the league in points per game last year. If they can stop some teams, and maybe finish in the top 15 of opposing points per game (D’Antoni’s goal), a potential 35-40 win season could be probable.

2. Leadership & Chemistry – The team has had a complete overhaul in the last year from the mess that Isiah Thomas constructed. However, the team is young, and filtered with talented players who also have empty resumes regarding a winning pedigree. This year’s team has made an effort to build team chemistry, and guys like Chris Duhon, Al Harrington, and David Lee have already taken a leadership role in holding players accountable for a lack of effort. Such an intangible is one the Knicks organization has lacked since the departure of Allan Houston. Hopefully, this is maintained through April.

3. Danilo Gallinari and Wilson Chandler – There is no question Gallinari is the most talented player on the roster. Gallinari is now 100% and the sky is the limit for the 6’11’’ sharp shooting athlete. Wilson Chandler showed last year that he can has a very promising future in the league as well. The continued development of these two will ensure the Knicks a cornerstone to build around for the future. However, they are also in the unusual position of developing, and playing key roles on their teams. If they can successfully meet the two requirements, which go hand in hand, the Knicks will enjoy more W’s than they did last season.

4. The Center Position – Last year David Lee shouldered the load at the center position. Although, in the offense it allowed Lee the luxury to beat many other legitimate centers down the court for easy buckets, on the defensive end Lee was mismatched. In fact, the Knicks were dead last in total blocked shots, and block shots per game. This year, the additions of Darko Milicic and Eddy Curry, who both have much to prove, will be interesting. If they can fill the void at Center and provide a defensive presence in the paint, it can go a long way in solidifying the first aspect stated above.

5. Absolutely, Seven Seconds or Less! – Last year, the team moved the ball well, played well, and performed the SSOL well in the first half. However, after team chemistry and the roster was depleted due to trades, instructing new comers on the SSOL offense became difficult and D’Antoni applied the breaks on his famed style of play. He allowed too much one-on-one to occur in the offense in desperation of making the playoffs. This year, the team will be intact from the beginning, and have plans to stay that way throughout the season. If D’Antoni maintains his style of play, and emphasizes moving the ball and 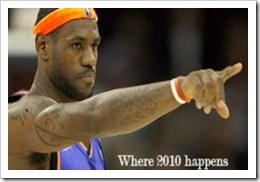 finding the open man, the Knicks can be assured a healthier and more prosperous season.

And well, if all fails this season…

Regardless, the future for the Knicks is now.