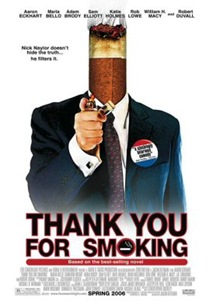 Nick Naylor, a big chief Tobacco spokesman, spins, deliberates, encourages and debates on behalf of cigarettes, while remaining a role model for his son, and learning to live with himself.

After being called during a meeting to discuss the issue of placing a “poison” symbol on cigarettes to warn those of the dangers of smoking, Naylor spins the argument against Senator Finisterre, a long-time adversary, by accusing Vermont of killing others with high cholesterol from their production of fatty cheese.

“That’s the beauty of argument. If you argue correctly, you’re never wrong”

Thank You For Smoking is a very clever film that lets you into the world of lobbying, politics, and corporate America with satire and comedy. The main character, Nick Naylor, has great definition as a spokesman for cigarettes. The film raises moral standards, and causes the viewer to ponder upon the moral standard (and flexibility) of those that have such careers, the validity and ethics in the “to pay the mortgage” defense, and the operations of corporate America and our government.

Thank You For Smoking is film that is highly recommended. One that is thought provoking, entertaining, clever in its dialogue, and hysterical. A definite must watch.