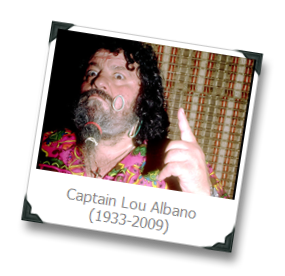 Professional wrestling has come a long way since it’s inception in the early 1930’s, and its pivotal evolution as hybrid-sports and entertainment in the mid 1980’s. With a collection of various talent, wrestling took off, and has yet to look back. We can name many who have paved the way and given their bodies, souls, and livelihoods for the current business we all enjoy. From Hulk Hogan to the Iron Sheik, the 80’s brought us many who were and are a blueprint in the wrestling business.

Yesterday, the wrestling world lost one of those blueprints in Captain Lou Albano. The Captain, a wrestler in his earlier days (1950’s) became famous for his legendary crazed tactics and personality, and as a manager of various Tag Team Champions.

Besides his ability to manage various champions, and talent as a promo guy and “mouthpiece” as is said in the wrestling business, Captain was one of the first guys that crossed over onto the big screen, appearing in “Girls Just Want To Have Fun” with Cindy Lauper. The Captain truly had a connection with fans of the past and the mainstream media, as wrestling fans of the past that no longer follow the current industry, such as my father, were saddened of Captain’s death.

The death of Captain Lou Albano is one that was shocking, and at the same time very eyebrow raising.
Captain, is of a kind that is dying – wrestling managers. Male wrestling managers. The art of helping wrestlers who are unable to “cut a promo” or convey themselves in front of the camera had various managers to help them along. Guys such as Albano, Bobby Heenan, Jim Cornette, Jimmy Hart, Colonel Parker, Master Fuji, and others were great in that role. Today, the industry has demanded more from wrestlers in schools, academies, and camps across the globe. And yet with more demands, there are still tremendous talents that still and will struggle in verbal communication when the red light comes on. Today, they are usually paired with attractive women with no art or flair for the role. It’s all about the ratings now, and blueprints like the Captain are being wasted – but that makes for another piece on another day.

Nonetheless, the Captain will be missed. However, the memories, contributions, and guidelines will not be forgotten.