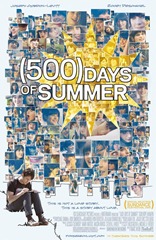 The relationship between a greeting card writer, who is just going through the motions, a woman who is hiding behind many social walls, and how their relationship changed their outlook on fate, destiny, love, and life.

Narrator: This is a story of boy meets girl. But you should know up front, this is not a love story.
and…
McKenzie: I tried to talk to her in the coffee room, she’s totally not having it.
Tom: Maybe she was just in a hurry.
McKenzie: And maybe she’s an uppity, better-than-everyone super skank.

I had reservations about watching 500 Days of Summer with my tag team partner upon hearing those dreaded words most guys run from – romantic comedy. However, after watching it, 500 Days is about 500 miles away from anything that signifies romantic comedy. In fact, in the beginning of the film, the narrator sets the sarcastic and humorous tone with the film being about boy meets girl, and not a love story. Upon that opening scene, I was set at ease to watch the movie with her.

With my reservations completely out of the way, 500 Days of Summer is a clever film that uses various techniques to bring the story of two people who meet, and their impact on one another’s views on life. The film uses numbers to identify the day of Tom’s relationship (or obsession as it later becomes) to express the the timeline of the current scene. It is helpful as the movie is in non-chronological order which keeps the viewer from lapsing into the normal formulaic plot. Other techniques also include the use of the split screen.

Joseph Gordon-Levitt, who must remember from his days on third Rock From the Sun, does a great job. 500 Days is not your typical romantic-comedy, and is a film that is very funny, creative, and is very far cheesy.

And oh yeah…there is a cameo from Minka Kelly, which doesn’t hurt as well.

Definitely worth the 93 minutes, and a film that is recommended.