Tiger Owes Us Absolutely Nothing 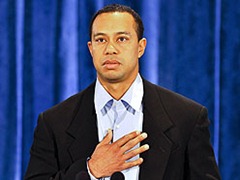 On Friday, Tiger Woods apologized to the world for his infidelity and actions. Three months after Tiger’s disappearance from the rest of the world (which is amazing in today’s TMZ-like media), he decided to begin his “recovery” with Friday’s press conference. Three long months where Tiger’s life, brand, career, and entire world took hit, after hit, after hit. From the women, the rumors, the analyzing, and the embarrassing texts and stories – Tiger Woods found himself in a position that he never thought he would be in.

In fact, Woods did one of the toughest things an individual can ever do – admit to the world he was wrong about personal issues that are grounds for severe embarrassment. Yet in doing so, it seems (like always) there are issues with his apology.


Some have criticized Woods for reading a prepared statement. Some questioned his motive and his ego as his press conference fell on the same day of a PGA event, most notably, one sponsored by Accenture, who recently ceased their working relationship with him. Some questioned the format of his statement, the invitational-only environment, and the ban on open questions from the media. Others considered his apology to be insincere, while another select few felt it could have been done better.

If that weren’t enough, some feel that Woods owes the public an apology. To push it one step further, some of Wood’s mistresses believe he owes them an apology as well.

And while the whole world watched/listened in cynicism, Woods made his way through his statement. Yes, he said some things that may have garnered some eye rolls such as, “I understand people want to know whether Elin and I will remain together. Please know that as far as I'm concerned, every one of these questions, and answers, is a matter between Elin and me. These are issues between a husband and a wife.”
I know, I know, a little too late for the sanctity of marriage spiel.

However, the truth of the matter is the only individuals that deserve an apology from Tiger Woods are the same people he directed his apology too in his statement – his wife, his kids, his mother, his wife’s family, his friends, his foundation, and all of the kids around the world that admired him.

Not myself, not you the reader, not PGA fans, or not even his mistresses. And whether or not “You believe Tiger’s Apology” as located and talked about else where in the media – it does not matter.

In fact, Woods gave us more than we deserve in a section of his statement that particularly stuck out. One that should interest the public, and somewhat humanizes Woods. A few lines that are hard for anyone, especially a person of his wealth and status to admit. Lines that are the cold hard truth.

“I stopped living by the core values that I was taught to believe in. I knew my actions were wrong, but I convinced myself that normal rules didn't apply. I never thought about who I was hurting. Instead I thought only about myself. I ran straight through the boundaries that a married couple should live by. I thought I could get away with whatever I wanted to. I felt that I had worked hard my entire life and deserved to enjoy all the temptations around me. I felt I was entitled. Thanks to money and fame, I didn't have far - I didn't have to go far to find them. I was wrong, I was foolish. I don't get to play by different rules. The same boundaries that apply to everyone apply to me. I brought this shame on myself.”

Wood’s apology and recovery is within his family and those close to him. Those are the people this situation hurts and truly affects. And while the whole theory behind being a “sex addict” is still blurry and somewhat farfetched in the eyes of many, including mine, it is imperative that Woods continues on a road to recovery. Not one that “cures” him of this addiction, but one that revolutionizes a man willing to do whatever it takes to win back his family’s trust.

For Tiger cheated on his wife and family – not on the green.

And for that, he owes us absolutely nothing.