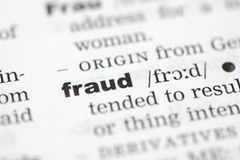 I can’t imagine that over the past nine years that Dome Pondering has existed and the near 200 posts here on BlogSpot, that the topic of fraudulent fans has not been discussed. After all, one hundred percent of Dome Pondering is about topics and situations that create passion in yours truly. And well, fraudulent fans rank high on that list.

“Fraud-bags” as I have come to label them (fake and full of you know what) are everywhere in life – especially when it comes to sports. There are various kinds of fraud-bags that annoy the real and passionate fans that enjoy the emotional ride of their favorite team and athlete (for the individual sports). Today, I expose these kinds of people. Here are the various versions of the fraud-bag.

These are the absolute most annoying and least respected type of fans in sports. There are  true fraud-bags that have such little respect for themselves, that they switch allegiances every year according to a team’s recent success. These types of fans ruin it for the passionate fans that go through the ups and downs of the team by latching their fraudulent tentacles on precious moments. 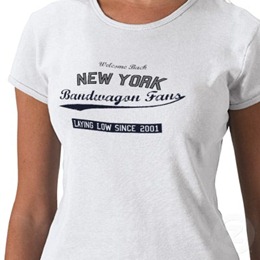 These type of fans will never die as they have been around for years and will be around in the future. Bandwagon fraud-bags see no wrong in their ways of changing allegiances. Discussing matters with them is useless because “their” team is always contending. There is no cure for the frontrunner fraud-bag as they morph each year with every new crowned champion.

Fair-weather Fans are people that only support a team when it is doing well. While the fair-weather fan is more respected than that of the front runner because of their allegiance to one team, the fair-weather fan can sometimes be just as annoying. These fans, just like front-runner fans, come out of nowhere for the good times and disappear when support in numbers is desperately needed.

On the other hand, it must be understood that not everyone is a die-hard sports fan. And not everyone is overly passionate or emotional about their team. That is a fair assessment, which is why some fair-weather fraud-bags are often left alone for their naive ways.

However, there are the specific types that are never around during the season, yet come alive during playoff time to attempt to prove their worthiness to the true fans. The types that would skip over rivalry week to attend to whatever is relevant in pop-culture during the regular season, yet claim the team as priority when the playoffs come around. They are the types of people that couldn’t tell you the line up or roster during the season. They are types that pull the sudden 180 to join back and attempt to prove their allegiance to be true during the good times. We all know the types: The constant Facebooking status update, over-aggressive wearing of team apparel, and the need to attempt to learn and regurgitate as many facts as possible to sound knowledgeable.

These types of fans have also been around for years. Yet, there is hope for the fair-weather fraud-bag. With signs of allegiance, hopefully that can become a full-fledged commitment to the good and bad times.

Examples: Just about any situation and team that has fans. 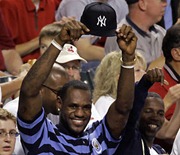 Another type of Fraud-Bag that boggles the mind is the Geographically Confused Fan. While this type of fraud-bag is one that has the right intentions – Does not change allegiances and is fully committed – their choice of teams are so asinine that it could very well pass for the aforementioned Bandwagoner/Frontrunner.

These are the types of fans that either have an array of teams from all over the nation, or have a variation of teams from rivaling cities that absolutely make no sense.

However, there are some loop holes and some technicalities in this type of Fraud-Bag that should be explained. If you are from a certain region, born, raised or both, and you move to another city, it is alright to remain with your initial team. e.g. John A moves to New York from St. Louis, but is still a diehard Cardinals fan. That is understandable. Another allowance is if you grew up a huge fan of an athlete, and due to that relationship became a fan of the team. e.g. John B living in Orlando followed Michael Jordan throughout the years and is still a Chicago Bulls fan today. That is also understandable. Other allowances include the nationally followed and adored teams such as the New York Yankees, Atlanta Braves (Due to TBS), Dallas Cowboys, and Los Angeles Lakers.

But let’s be honest, how many fans of Michael Jordan, and yes, “Bulls fans” are still rooting today for Derek Rose and company? Not many. Fraud-bags. How about those that are fans of weird combination of teams from rival cities that genuinely dislike one another such as Yankees-Celtics? Red Sox-Giants? Fraud-bags. And how about the fans that like teams all over the nation with no direct ties or reasoning? Padres, Timberwolves, and Panthers. Yes, fraud-bags.

These type of fraud-bags are curable, yet are tricky. They can fall under either frontrunners or fair-weather fans at an moment because of their unique situation.

The “ESPN Said it So it Must Be True” Fans

The final types of fraud-bags are the fans that believe that ESPN is the be all-end all of anything sport related. While I enjoy ESPN, its programming, website, magazine, and anything else that is distributed by the brand, it is understood that it is not the only form of journalism in sports. In fact, much of the time ESPN is not a direct source of information, and is often times last in breaking news stories. However, this is not intended to attack ESPN, but directing at the fans that believe anything that comes from the Worldwide Leader in Sports.

These types of fans are the ones that memorize, recite, and repeat anything that is said by ESPN analysts and opinionist (which the majority of them are) as law. I’m sure some of you have heard the rebuttal in some argument “well so-and so on ESPN said that…”.

These type of fans love the Kool-Aid that is given to them, and are often unaware of other well respected journalists and experts that are not employed in Bristol. They are usually unaware and unafraid to think logically about games and athletes. Whatever and however ESPN breaks it down, is how they will view it.

Whew, after nine years I am glad that is finally out there. Fraud-bags are everywhere, so beware true and passionate sport fans. Hopefully this will help you in identifying them, or if you are currently one, in changing your ways for the better.