Jumping Aboard The Tim Tebow Bandwagon

I never quite understood the aura and legend that was Timothy Richard Tebow. I never understood the reason he was as big of a phenomenon at The University of Florida, and within the college football ranks as he was. He is an outstanding athlete, very mobile for his size, and heralded by Floridians as their hometown blue chipper. I get that. I also understand the accomplishments of being the first ever sophomore Heisman trophy winner, holder of various NCAA rushing and passing records, and all the much talked-about intangibles and leadership that Tebow possesses. I get all of it. Tim Tebow is amazing.

But so were many other athletes on the collegiate level in our lifetime. However, for some reason, Tim Tebow ascends them all. And now that he is removed from the fame and grandeur, and in a time where he is being blasted for the important things in his life, is when I finally understand it all. After all these years I completely understand why Tim Tebow is admired by so many, and it is not because of what he did on the field, but in fact, who he is.

After reading an interesting (and highly recommended) story on ESPN.com by Jemele Hill, my admiration for Tebow went beyond it’s simmering status. I’m now a big fan. I may not be from Florida, but count me aboard the Tim Tebow Bandwagon.

Tebow, who is endorsing a pro-life message in a commercial with his mom during the Super Bowl, is the target of many who either oppose his stance on the topic, or feel the message is inappropriate during a time where political and social message ought to be banned during America’s unofficial holiday. 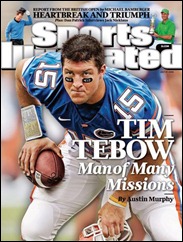 And if politics and society weren’t enough, Tebow is currently going through the grind of hearing about the flaws in his game which has gained him the accolades and fame he has endured over the past few years.

However, Success hasn’t changed him.

Through it all, Tebow continues to be himself. He is still the same Tim Tebow that endorses his faith in Christianity in everything he does. And the same person that always places Jesus Christ above any football-related matter in his life.

I absolutely get it. And if you do, Tebow is a person that is easy to root for.

As a fellow believer, I greatly admire Tebow for his courage and conviction in taking such a stance despite ruffling a few feathers and taking tons of heat. It is very easy to get caught up in this life of fame, money, and temptation, however, Tebow has never attempted to please anyone or be “politically correct”. He has lead a life that is true to himself, and most importantly, the great God above.

With so many athletes in our world today that say or do whatever is needed to protect their image (and brand), we’ve all become desensitized to it, and accept it as the norm. However, we often see through their lies and phony ways in interviews and sound bytes, yet never mention it. We ignore the 800 pound gorilla in the room because that is the status quo.

Tim Tebow isn’t the status quo. And because of that he is made fun of for his bible verse eye black, his virginity, and his beliefs, all in accordance to being called overrated in regards to his talents on the field.

Tim Tebow maybe not be status quo…but Tim Tebow is Tim Tebow. And in agreement with the words of Jemele Hill in her story, “You may think the media fawns over him way too much. And you may think he's overrated. But the one thing you can never say about Tim Tebow is that he's a fake.”