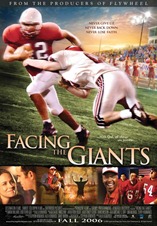 A High School Football coach and his football team overcomes many fears personally and professionally by rededicating themselves to faith.

After Brock is not confident that the team can beat their upcoming opponent, Coach Taylor challenges him. Taylor challenges him to a ten yard death crawl. Brock believes he can do it. Taylor follows by challenging him to a 50 year death crawl. Brock doesn’t think he can do it, but agrees to give his absolute best. Taylor blindfolds him before the attempt, and Taylor wills him to a death crawl for the entire length of the field.

“With God, nothing is impossible”
“I want you to give me your absolute best”

Facing the Giants is a movie with a great message. A film that inspires viewers to live through faith in tough times. Coach Taylor uses his Christian beliefs to remodel and refocus the philosophy of his team when his life could not get any worse.

Despite the below-average acting (Especially in the opening scene), Facing the Giants finds a way to connect the viewer to the character of Coach Taylor.

Even though I am a sucker for football movies, Facing the Giants is an average movie to watch if you have 90 minutes to spare. It might be a little cheesy for most, but is passable.