September 26, 2010
Yesterday, yours truly played in a charity softball game that raised money for the Nassau County Coalition Against Domestic Violence. The game which saw the Lynbrook Baptist Church against the Lynbrook Volunteer Fire Department, raised $6,215 for the charity group. The event gathered a community crowd that saw the Lynbrook Baptist Church defeat the Volunteer Fire Department 21-20 with a walk-off three run homerun. After playing  an entire summer where we went winless, we finally won in a dramatic game that many were just hoping we made it competitive. A true underdog story that occurred on television, and in front of the community. A simple game for charity, but one of the best sports stories and experiences that I have ever been apart of in my life. Below is the article from the Lynbrook Patch along with some pictures from the event.

Going to Bat For Nassau Group
By: Ursula Moore

A six-run seventh inning led Lynbrook Baptist Church to a 21-20 victory against the Lynbrook Volunteer Fire Department at the Charity Softball Game held at Greis Park Saturday night. The event raised $6,215 for the Nassau County Coalition Against Domestic Violence (NCCADV).
Lynbrook Baptist Church Pastor Robert Walderman said he is beyond thrilled by the fundraising total. "It's more than we expected and we are very appreciative," he said.

The charity game was originally organized as a benefit to raise money for both the NCCADV and the Lynbrook Volunteer Fire Department Training Center. The proceeds raised were to be split evenly. But in the spirit of giving back, the firefighters decided to donate their half.

"We elected to return our share and give the entire amount to the Domestic Violence Coalition," said Lynbrook Volunteer Fire Department Fire Chief Raymond Burke. "We wanted to help such a great cause in a big way."

Said Walderman, "We are delighted that the fire department decided to give their half in. It means a lot."

Mindy Perlmutter, Director of Education for the Nassau County Coalition Against Domestic Violence, said she is ecstatic and grateful about the amount given to the organization. "The agency is so very grateful to the Lynbrook Baptist Church and the Lynbrook Fire Department," she said. "The amount raised was fantastic. It was a great night and a great game. What they did for this agency is incredibly appreciated."

According to Walderman, the win didn't come easily. "It was a thrilling victory," he said. "We came from behind and won. The fire department played a really good game. To see the camaraderie and fellowship amongst the people was wonderful."

For the players, a friendly competition was the name of their game. "It was a lot of fun," said Burke. "We ate pretzels, played softball with a bunch of good guys and raised money."

With the event being such a success, Walderman says he's ready to go to bat again. "A lot of the men showed interest in playing another game and we would love to do another charity game," he said. 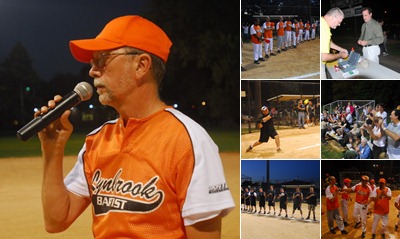