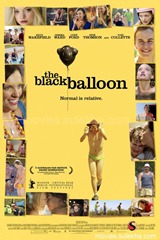 Thomas Mollison learns to come to grips with living with his autistic brother while attempting to live through a normal adolescence.

When Thomas takes his eyes off of Charlie for a few seconds, Charlie runs out of the unlocked front door down the street in his underwear. Thomas begins chasing him down the street until Charlie realizes he needs to use the bathroom. He runs into a neighbor’s house and uses their toilet. The house ends up being one of Thomas’ classmates house, who happened to be showering at the time. Thomas eventually runs into the house to grab Charlie when she eventually screams as she later put it, “two strange boys in their  underwear in her bathroom.”

Thomas Mollison: Dad, do you ever wish Charlie was normal?
Simon Mollison: All I know is he's my own, and you're weak as piss if you don't look after your own.

The Black Balloon is an interesting movie that may cause a stir with some. However, overall the movie does a great job of bringing to light not only autism, but the lengths and hardships that families with autistic kids go through. Most importantly, the Black Balloon creates a sense of humor around the issue of autism that is rarely, if ever, mention around the disorder.

The Black Balloon is one of those many indy films that exhibit great performances out of its actors, most notably Rhys Wakefield as Thomas Mollison, and Luke Ford playing an autistic Charlie Mollison.

Despite not having a true plot, The Black Balloon is a film that is entertaining, informative, educational, and a great insight into the world of autism.