The One Word To Describe Braylon’s Decision 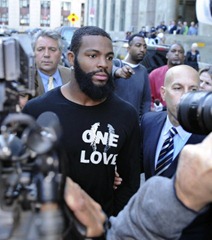 Those were the first words that exited my mouth upon reading the news regarding Braylon Edwards recent arrest for drunk driving. It’s the kind of response that reeks of sarcas, begs for a head shake, and the calling of a name that perfectly supports the current situation. At the time, stupid sounded like the best word. After all, what in the world was he thinking?

Ah mean, what’s with New York football players, who are wide recievers, and who wear #17?

In a world where we hear stories of drunk driving taking innocent lives too many times, not to mention the horrific story involving Dante Stallworth, which should hit home with Edwards, he ought to know better, right?

After taking a few minutes to allow the immediate Jets fan emotional rant subside in me, the best word that comes to mind to describe Braylon Edwards’ decision was simply this – arrogance.

It’s this type of arrogance that Edwards displayed convincing himself that he can handle a night out on the town, and that he did not need car service or a ride home from someone else. It was the same arrogance that Edwards that only grew and manifested itself from a great game the day before against the Patriots. A game which Edwards must have thought must had given him that superman-like shield, causing him to think he was invincible – a case that many athletes suffer from.

It’s an arrogance that is built upon the fact that the media slacks on holding football players accountable for such actions. We’re too caught up with fantasy leagues and worrying whether Edwards suits up in Miami this Sunday. It’s the type of accountability that creates unconditional arrogance, which triggers nothing but trouble.

Fortunately, while arrogance often clouds judgment and an lead to terrible outcomes (once again, see Dante Stallworth), luckily, Edwards’ arrogance did not lead to any harm or fatalities to others.

As for the labels of stupid and dumb, well stupid goes to the NFL that has a loop hole in their current collective bargaining agreement that allows such actions to go unpunished.

And dumb, well dumb definitely is for the decision of D’Brickashaw Ferguson and Vernon Gholston who were riding with the loaded up Edwards at the time of the arrest. Great decision guys.