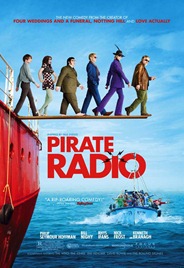 The story and adventures of a band of rock and roll rogue DJ’s aboard a boat in the North Sea. They produced and delivered a pirate radio station in the United Kingdom during the 1960’s when rock and roll music was outlawed.

After learning of the new (and returning) Gavin Cavanagh’s deceptive story that included a woman that was thought to have married one of the DJ’s on board, The Count challenges Gavin to a game of chicken. The game concludes with both of them jumping off of the ship’s mast into the North Sea for a draw.

Quentin: Gentlemen, I have some good news and some bad news. Which would you prefer?
Thick Kevin: Good news.
Quentin: Okay. The good news is the engine has exploded and we're all going to die.
Dave: Hello, Dr Dave, Radio Rock. How is that good news?
Quentin: I haven't yet told you how we're going to die. That's the bad news.
Simon: How are we gonna die?
Quentin: We're going to drown in the freezing waters of the North Sea.
Felicity: Dearie me.
Quentin: There is a huge hole in the side of the boat and in an unfortunate development, it transpires that the lifeboats are useless.
Thick Kevin: [to Angus] Actually, that's quite good for you, isn't it? 'Cause you can't swim, so you'll die quicker.
Quentin: Sorry.

Pirate Radio is a rather hilarious film. It is a movie that really does not have a true plot, but rather one that introduces and takes the viewer along a ride of watching the DJ’s do what they do best – live the life of rock and roll.

The film does a great job on introducing and solidifying the character of each DJ early, which lends itself to the duration and confusion of the film. You really get a true sense of the kind of crazy and wacky group they really are.

Pirate Radio is not a masterpiece by an sense of the imagination, and really isn’t a film that is likely to make one to think or force one into emotion, but rather a film that is fun and enjoyable. Recommended if you’re looking for an easy watch.

June 11, 2022
What is it about?  Din, a determined Teen who lost his best friend, runs into a wish-granting dragon who unveils the power of possibilities, but also of life's greatest values.  Who is in it?  Jimmy Wong - Din Natasha Liu Bordozzo - Li Na John Cho - Long
Read more
Tweets by @DomePondering