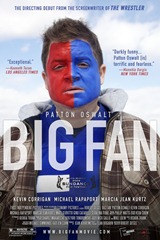 Paul Aufiero, an obsessed New York Giants fan, struggles to deal with the consequences after he is assaulted by his favorite football player and hero.

Sal visits Paul in jail and reveals the upcoming Giants season schedule to him. After looking at the schedule and projecting the Giants season, Paul looks forward to the Patriots game because it’s the day he gets out of jail. Then claims, “it’s gonna be a great year!”.

Big Fan is a film that all sports fans should put time aside to watch. A very realistic film that sheds light on the sports fan that bases his life around his sports team and the world of sports. From the screenwriter of “The Wrestler”, the film does a great job of portraying reality and the life of a devoted sports fan all while acknowledging their over-the-top mindset and humorous behavior.

Patton Oswalt is very convincing in Big Fan as “Paul”, which is somewhat similar to the character of “Spencer” he played on The King of Queens. Oswalt is absolutely believable in the role, and seems comfortable in playing the obsessed-loser hardcore Giants fan content with his life.

The only drawback is the lack of development of the surrounding characters in the plot, and the lack of depth in the overall plot. There are times where you feel like you only know the characters because they are a familiar face, rather than their name and meaning to the film. And what happened to Quantrell Bishop?

Nonetheless, Big Fan is a film is not great, but is definitely not terrible. At the 88 minute run time, it is highly relatable and recommended for the sports fan – in between the games, of course.