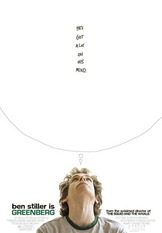 A soon-to-be middle-aged man that moves to Los Angeles to house sit for his brother reflects on the the decision that changed his life, while sparking an interest with his brother’s assistant.

Just about any scene where Roger is writing one of his letters of complaint to a company or corporation regarding their service or product.

Ivan Schrank: Youth is wasted on the young.
Roger Greenberg: I'd go further. I'd go: 'Life is wasted on people.'

First, the positives. Greenberg is very funny as it is filled with witty one-liners and comical real-life interaction and dialogue. There are a lot of moments of subtle and sharp humor. Also, the character of Greenberg is very well defined throughout the film. Greenberg is a 40-year-old man who is still searching for life and is very bitter about his decisions. Most of all, he is a complete jerk. However, towards the end of the move, the viewer begins to feel for Greenberg and his “ways”, which can be construed as very real when compared to reality.

Finally, the acting of Ben Stiller in a less-than-usual wacky character is excellent. In fact, it is one of the best roles he has ever played. Gret Gerwig is also very good in the movie as well.

Unfortunately, such positives do not hold up enough to push Greenberg to a respectable grade.  Although many movies get by without having a true plot (e.g. “Up In The Air), Greenberg is not one of them. It’s unbearable slow moving pace and abrupt ending is cause for a lack of entertainment and interest. Some scenes just seem out of place, or just downright useless. When it comes down to it, Greenberg is flat, and will leave the viewer empty when it is over.

Only recommended for Stiller’s ability in a less wacky and deeper character. Otherwise, use the one hour and forty-nine minutes (running time) to do something more fulfilling.