Bound For Glory Could Mark New Era in TNA Wrestling 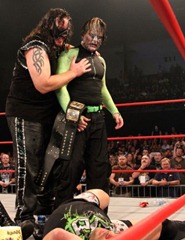 TNA Bound For Glory has come and gone, and the recent developments in Total Nonstop Action Wrestling has created a situation that has everyone in the world of wrestling buzzing. Of course, the situation being alluded to is the heel turn of probably the most popular wrestler in all of pro wrestling – Jeff Hardy.

With weeks upon weeks of build up surrounding the “10.10.10” storyline and the mystery of “they”, the entire saga was revealed with Jeff Hardy aligning with Hulk Hogan, Eric Bischoff, Jeff Jarrett, Ric Flair, and the all of Fortune to form the stable, “Immortal.”

Now following Bound For Glory, which I must admit, was subpar in comparison to other BFGs, everyone’s opinion went one of two ways: 1) It was the dumbest move TNA could make, and 2) it was a great move that will spark lots of interest. Initially, as BFG went off the air, I loved the idea, and the new direction TNA seemed to be heading in. I hated the quirky finish to the main event, but the payoff to the “they” storyline, and the possibilities it creates for future in-ring matchups were something that seemed endless. However, as with most wrestling storylines (especially TNA), I wanted to wait until the fall out on the following iMPACT to really solidify my stance.

Well, despite the lack of wrestling on the broadcast (hopefully, due to the fall out from BFG) it seems that TNA Wrestling is on to something that may take the company to a new level. The series of promos and interaction between Dixie Carter and Immortal is great stuff that seems to be setting things in motion for the next few months. More impressive was the new persona of Jeff Hardy who is refreshed and impressive in his new role as a heel.

And while some may still complain about the direction of the company, the television ratings of last Thursday’s iMPACT prove that many are interested in the new direction the company is headed in. While I still hope for more X-Division action, the new and current direction of TNA Wrestling is proving to be the best thing going in the wrestling industry today, and most importantly, could be the start of a new era in TNA Wrestling.