The Real Reason We Are Not In The World Series 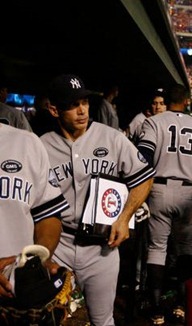 Following the elimination of the New York Yankees last night at the hands of the talented, and hot, Texas Rangers, raw emotions are high here in the big city. Unlike the years where most eliminations occur, this year seems to be a little different. Instead of mourning, sorrow, and sheer sadness, there seems to be a growing unrest amongst some in the Yankee fan base. Whether that unrest seems to come from the real fans, the fraudbags, or others in this city, there are many that have an opinion on what happened, should have happened, and what must happen going forward.

With all of the cloudy emotion and judgment being on high, one thing is for sure – everyone is overreacting.

Here are some of the comments, thoughts, and reactions that were made on sports talk radio today that are an example of the overreaction:

“C.C. Sabathia should have been in after Girardi pulled Hughes”

“If Sabathia was available for 50-60 pitches, why didn’t Girardi just start him for game 6?”

“Girardi is not the guy for this job. He got lucky last year.”

“Girardi needs to use his gut more, and stop relying on that stupid binder. We lost this series because of him.”

“We need to go out and get Lee, Crawford, and Werth.”

“A-Rod will never be a two-time World Series Champion like Jeter.”

Logical? I didn’t think so.

The fact of the matter is this – the New York Yankees were outplayed by the Texas Rangers. Point. Blank. Period.

In fact, if it weren’t for a breakout 8th inning of game 1, the ALCS could likely have ended in a sweep. Texas were better in all facets of the game – pitching, hitting, fielding, running, and even the intangibles.

The entire series felt like an up hill climb, including all but Game 5 where the Yankees played from behind.

In a series for the Yankees where A-Rod, Jeter, and an eventually hurt Teixeira came up empty, Sabathia and Hughes were both average, the bullpen always having to pitch from behind or with inherited runners, and Posada unable block a pitch or throw out a runner, it’s unbelievable that Girardi seems to be everyone’s root and prime suspect.

I understand that there needs to be a fall guy. And as manager, he is that guy.

However, Girardi, a man who’s physical appearance is evident of the pressure that comes with being manager of the new York Yankees, has done an absolutely great job over the past three seasons. Heck, he lead them to a championship last year! He’s done a great job of managing and at some points, getting the most out of his bullpen.

At the end of the day, he cannot play the game for the men whose names he writes on a lineup card. He made the same moves he has been making all year. He put the correct players in the right position to succeed the same way he has all year – the same way he did last October. Except this time, for one week, for six games, very little of them worked.

An argument can be made that Girardi did little to adjust. However, the argument – any argument - against Girardi for the loss of this series is strictly once again, overreaction.

I’ll be the first Yankee fan to admit, the better team is moving on. So let’s stop giving poor excuses and crazy reasons for the loss. Let’s stop searching for someone to blame this failed run at number 28 on. Let’s stop wishing for crazy acquisitions and talent transactions over the winter. Let’s look no further than the clearest and simplest way to cope with, and to answer, why we’re not in the World Series.

We were outplayed, period.