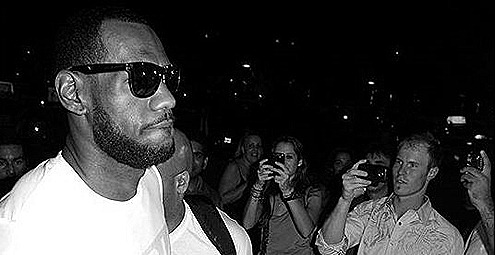 It is the reason the city of Cleveland burned his jersey upon learning about his departure. The nerve of a black man to leave Cleveland.

The rest of the nation was disgusted with “The Decision” because it surrounded a black man. The nerve of a black man to be a free agent.

The nation’s backlash against LeBron’s decision to join the rest of the super friends of Miami was because he was a black man joining other black men to play basketball. The nerve of a black man to join a really good basketball team.

Race has to be the reason why you are viewed this way, right LeBron? Right, Maverick Carter?

“I think so at times. It’s always, you know, a race factor”

“It definitely played a role in some of the stuff coming out of the media, things that were written for sure.”

Wow. Are they seriously using the race card to cover up their mistakes?

Upon reading Lebron’s comments which were of course, and undoubtedly, cosigned by his “business partner"/friend”, Maverick Carter, I could not believe what I was reading.

Maybe he enjoys being the new guy to hate in professional sports?

Or maybe, just maybe, Lebron doesn’t think he is wrong?

Is he that naive? That… well, umm…dumb?

This “Summer of LeBron” revealed three things about Lebron James: 1) how uneducated and out of touch his “team” (his friends) really are, 2) his true lack of loyalty and lack of competitiveness, and 3) that he believes he is not at fault for any of this backlash. None at all.

And while this all began to unveil itself when LeBron decided to “take his talents to South Beach”, it seems LeBron continues to build upon his image of becoming (being) the most pompous, pretentious, and clueless athlete in sports.

The public backlash against LeBron has absolutely, and undoubtedly, zero chance of being connected to the fact that he is black. The majority of the NBA is black. Shaq left Orlando high and dry for Los Angeles without any major backlash. Tracy McGrady at one point switched teams. So did Amar’e Stoudemire recently, including his new teammate in Chris Bosh. The reason each of them never received negative feedback is because they didn’t need a one hour special of ESPN promoted propaganda to make their “decision.”

The real backlash backlash comes from the arrogance and ego that LeBron and “his team” exhibited from “The Decision”. Or how about the public embarrassment and humiliation he put the city of Cleveland through? Or yes, even that grand spectacle of dancing, posing, and showboating to cap it off in Miami. Pick one. They all did damage. LeBron pulled off the trifecta in a week.

Now this “Race factor” blame can now be added to list.

In fact, what LeBron fails to realize, the true “race factor” in the NBA is not involving the black athlete, but the one of the white athlete. The white player, who has the tougher hill to climb and the larger stereotype to break because of his skin color. He’s white, so he can’t run, jump, be physical, or play above the rim. He’s just a shooter. Yup, the only comparable player for the white player is Larry Bird. But that’s another post for another day.

LeBron needs to seek advice from someone who has been in the business, and understands how it works.  He won’t get that from Maverick Carter and the rest of his band of friends that have gotten him into this hole – the one he needs a huge ladder get out of.

The shocking fact is, it is that easy to put this all behind him. A simple admittance of being wrong about the way he left Cleveland and his free agency would suffice. We are, and have always been a very forgiven society (see: Michael Vick).

Unfortunately, LeBron and Maverick Carter do not believe they, or anything they have done was wrong.

Jason Whitlock, who has never been afraid to state his opinion on such topics does so in a great piece. He touched on similar points stating:

“The truth is, LeBron James and his kiddie corps of handlers are no threat to the power structure. None.

LeBron James and his business partner/friend Maverick Carter are two spoiled kids, drunk on fame and privilege and clueless about how to maximize and utilize the power they have.

LeBron’s enablers are providing him the racial cocoon of denial. They’re giving LeBron an excuse to avoid dealing with his own bad (The) Decision.

LeBron blew a perfect opportunity to say, ‘Man, I screwed up the way I left Cleveland, and I regret the animosity it created. It’s a mistake I’ve learned from.’”

The following are additional feedback and comments from Charles Barkley. Barkley is real, candid, and the straight shooter that he always is stating:

"Sometimes you just say he’s making bad decisions and you’re like okay, he’s gonna get it together. Then he makes more bad decisions. The thing that’s interesting about LeBron ... Magic, Michael, and myself, we said we wouldn’t have did it. That’s not a criticism. We were asked a question. I don’t want to play with Magic Johnson, Larry Bird, or Michael, I want to beat them. That’s strictly basketball. The only criticism I’ve heard about LeBron and it was my biggest criticism, that decision thing was just stupid. It was stupid.

The second thing when they all came out there dancing around on stage, that was silly. That’s the only thing I’ve heard LeBron get criticized about. That has nothing to do with race. That’s what makes this last thing so stupid. That’s stupid. The only criticism of LeBron has been the decision and the one hour of our life that we can’t have back.

And ESPN, oh my God. Oh my God. To go down to training camp and report everyday is one of the most ridiculous things I’ve ever seen. I’m watching yesterday and one of the guys actually said LeBron looked fierce in practice. I’m like fierce in practice? What the hell does that mean? He was fierce in the second day of training camp. You’re like come on man, he really didn’t say that did he. This summer with LeBron and all the stuff that went on is like a bad movie. You just can’t make this stuff up. They do realize the Lakers have won the last two championships? If you're going to cater to somebody, at least cater to the guys who have actually won the last two championships. They have definitely crossed the line and this is unprecedented. This is unprecedented a-- kissing."

I’m glad I wasn’t the only one that noticed ESPN’s continued LeBron worship. Four days ago it was tweeted here at the DP, “ESPN is at Heat camp along with a booth and their analysts. Didn't see that one coming. *Sarcasm* Let the butt kissing begin.”

Sir Charles is completely right - it needs to stop.

Nonetheless, LeBron’s recent  attempt to play the race card is just another action that forces me, and probably many more, to lose respect for him. It is amazing to think about the 180 that LeBron and his image/brand (Isn’t that what he is supposedly so conscious about?) has undergone since July 1st, 2010. As alluded to by Barkley, his self-inflicting actions just won’t stop.

But why would it?

LeBron, Maverick Carter, and the rest of his team don’t believe they have done a thing wrong.