UFC 121 Loss is Best For Lesnar and White 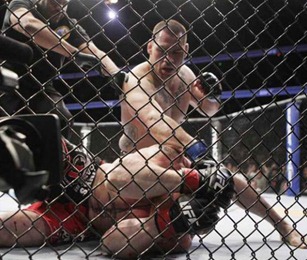 There is no other way to put it, Brock Lesnar looked absolutely awful this past Saturday night against Cain Velasquez. In fact, Lesnar, the former UFC Heavyweight Champion, looked so awful that it reminded everyone that he is indeed inexperience, that he did only have six professional fights going into his bout with Velasquez, and that he might have been a product of the UFC marketing campaign.

Lesnar, who came out aggressive, even firing a flying knee, was picked apart by the more experienced and more rounded fighter in Velasquez. Going into the fight, Velasquez had all of the abilities that made for a recipe to dethrone Lesnar. Velasquez is a two-time All-American wrestler that can strike and is light on his feet. Velasquez also had a template given to him by Shane Carwin who had Lesnar beat in his last fight before tiring himself out with an all-or-nothing (senseless) strategy.

However, as the dust settles on UFC 121, the biggest issue is not Lesnar’s loss, but it is loss of the UFC’s most marketable attraction and champion. There is no doubt that Lesnar will train harder and come back bigger and better than ever. However, with his loss, the UFC is exposed just a bit in their push of Lesnar.
There is no doubt that Dana White has a gem in Lesnar, who has incredible size and strength, and is freakishly quick. However, the fact is this – Brock Lesnar was made by the WWE. Brock Lesnar was made by pro wrestling. As much as the die hard MMA fans would like to argue against that point, Lesnar gained his popularity from pro wrestling, and his transition had such hype because pro wrestling fans knew what Brock Lesnar was capable of doing inside the octagon if he ever received the proper training. Heck, after the fight, Lesnar had a brief stare down with WWE’s The Undertaker, which touches on real-life animosity between the two from a few years ago. The confrontation created such buzz that White was forced to hold a press conference stating that Lesnar was not headed back to pro wrestling. 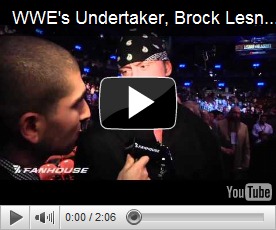 Nonetheless, lightning struck last year and Dana White became lucky that his new poster boy became World Heavyweight Champion. And while many still marvel at the potential of Lesnar, it was the big black gorilla in the room that his reign as champ seemed somewhat tied in with his popularity.

Now, he not only lost the heavyweight crown, but was exposed, and exposed badly.

Lesnar can now get back into camp, train harder than he ever has before, and come back hungrier than ever. Most importantly, he can return not as the big, huge, former WWE wrestler that has great potential in MMA, but a solid well rounded fighter that has (finally) put everything together, and is unbeatable.

This loss might have been is the best thing to ever happen to Lesnar’s MMA career. And yes, even to Dana White and the entire UFC.

Lesnar has the opportunity to be reshape his legacy as one of the best mixed-martial-artists ever, and not as some type of cheap gimmick.

And White, well, he may have lost his his most marketable champion, but now he has shed the image of having a champion who was nothing more than a MMA shell.