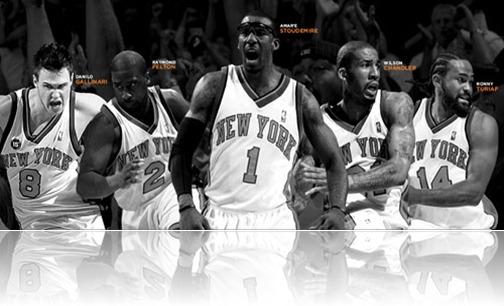 Now that the summer of 2010 has come on gone, the new era of the New York Knicks has begun. And while the Knicks did not land either of the super friends that decided to take their talents to South Beach, the Knicerbockers landed a player that wanted to be here, and most importantly, embraced the opportunity to be a leader and spearhead this new era.

As the new season is set to begin, the Knicks are undoubtedly better than any team they have put on a court in the last five years. With a legitimate star, a productive point guard, young talent, and a great supporting cast that fits the seven-seconds-or-less offense, the new season is one that has plenty of anticipation and excitement heading into it. However, with ten new players that make-up this young (4th in the NBA) roster, there lies a lot of questions this season. With the current goal of the franchise to make the playoffs this season, here are the five keys to the New York Knicks for the 2010-2011 season:

1. Help Wanted! – We all know that Amar’e Stoudemire is going to score, score, and well, score. And while Stoudemrire will face double and on some nights, triple-teams, someone else will need to step up. No, Carmelo Anthony is not walking through the Garden doors anytime soon, therefore, the answer will have to come from within. The most logical choice will either be Wilson Chandler and/or Danilo Gallinari. Both players will not only need to step up and take their game to the next level, but will need to be consistent every night. If both can develop into the very best their potential suggests, the Knicks can surprise a lot of teams and “experts” this year.

2. STAT As Advertised – While we already covered that Stoudemire will score in this system, can he be the guy the Knicks have been looking for since Patrick Ewing. New York is not an easy place to be that kind of guy, and so far, Stoudemiore has said and done the right things from becoming part of the sporting media fabric, to leading in the pre-season. If he can play like the $100M player the Knicks expect him to be, maybe even force his name into MVP chatter, the Knicks maybe well on there way to a good season. Imagine that for a change.

3. Defense – Defense! – clap – clap – defense! The traditional chant at the guard we often hear at the Garden have rarely been reciprocated on the court by the players. In D’Antoni’s first two years here, his teams have fared well in offensive categories in the NBA. Defense on the other hand, were on the other side of the spectrum as the Knicks have been of the worst defensive teams in the NBA for the past two years. However, in D’Antoni’s defense, he has had teams that were always in flux, or simply make-shift, due to the salary dumping to get to this point.

Now, there are no excuses. With considerable hard-nose defenders in the back court with Felton and Douglas, including much needed size and length in guys like Mozgov, Turiaf, and Randolph, the Knicks ought to be better. In fact, they need to be better in order to have a winning season. No one is predicting championship, however, by the blueprint laid by the Celtics and Lakers last year, we’ve seen what defense can do for a team.

4. Felton, Steve Nash East? – Raymond Felton is the best point guard the Knicks have had in recent memory, period. Better than Eisley. Better than Marbury. Better than Duhon. Felton I believe can flourish in this system. His strength and speed allows him to be a perfect fit. How good can he be? The better question is, how good does he need to be? The pick-and-roll combination with Stoudemire has potential be very dangerous. However, Felton doesn’t need to become the East Coast version of Steve Nash. All Felton needs to do is lead this offense in productively running opposing teams ragged every single night.

5. Lean on Me – Finally, how fast can this team gel and become comfortable in a system that is new, with teammates who are new? Chemistry is going to be very important, especially for a team and franchise that needs to get off to a good start with a tough opening schedule.