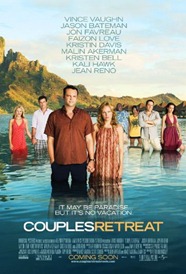 A group of friends follow one couple onto an island in support of their friends, a couple, who are in need of marriage counseling. Once on the island, the other friends, three couples, realize that participation in the resort’s therapy is not optional.

While in a a hardware store searching for tile samples, Dave’s child begins using one of the toilets that is set up for display.

Couples Retreat is a film that is loaded with a who’s who of talent. With such a cast, the acting in this comedy is great with the surplus of talent really shining through. Unfortunately, the writing, and rest of the movie does not support the cast’s abilities.

Couples Retreat is not exactly a terrible movie. However, it is not a great one either. It’s just there. The movie was neither very funny, yet, nor was it a dud. The plot, which was far fetched to begin with, was lackadaisical, and made for very little comedic humor. While the film was produced by Vince Vaughn, and his style of delivering comedy works for him, the rest of the short quips and one-liners fall flat throughout the movie from others.

Couples Reteat has it’s moments. Unfortunately, not enough of them. All in all, the best way to describe Couples Retreat is that it’s average. Simply average. Not highly recommended, but in true “average status”, wouldn’t recommend not watching it either. For it is the type of movie that you are better of waiting for to appear on USA, FX, or E!.