Why is Marriage Becoming Obsolete in America? 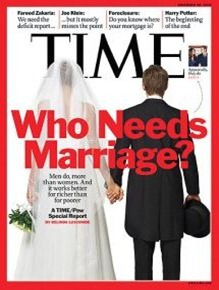 It is no secret to my readers, followers, and DP devotees that yours truly is set to get married in 2011. As a future newlywed, and an individual that is set to take the vows and responsibilities that come with marriage, I was stunned to read an interesting article on CNN.com on November 22nd. The article, which can be read here, is one written by Stephanie Coontz who looks at the state of marriage and it’s relevance in today’s society. The article is a followup on the recent study found in TIME magazine.

In a study conducted to spur her article, Coontz has found that 40 percent of adults feel that marriage is becoming obsolete, yet, most say they want to marry. Although her reasons are valid, there might be other underlying sociological reasons for the current distorted view of marriage.

“According to a TIME/Pew research poll released, 40 percent of Americans believe that marriage is becoming obsolete, up from just 28 percent in 1978”

Coontz, who does a great job in explaining the generational change in viewing of marriage in her opinion piece, concludes the change as being a difference of viewing marriage as a first step in adulthood in the past in comparison to the very last step in today’s day and age. Such a change is due to such sociological factors such as economics, careers, and personal growth. One of Coontz’s best statements in her articles is, “Couples increasingly want to be certain, before they marry, that they can pay their bills, that neither party is burdened by debt, that each has a secure job or a set of skills attesting to their employability.”

The current economic climate is one that has forced many couples to evaluate and plan their course toward marriage. It is indeed a wise move to do so. However, while many reports and statistical findings rely heavily on income, finances, and economics for lower percentage of marriages occurring, part of me believes there is more to the story of why marriage in the United States is becoming obsolete.

Part of me believes that our view on marriage has become distorted. We now live in a time where marriage, as we now know, is a last resort; a reason to have a whole day event about themselves; long-term couples who live together with children do not feel the need to wed; and couples who are wed, easily give-up on their marriage without attempting to fight through the challenges that comes with every marriage.

Heck, it seems our society is more enthralled with fighting for the opportunity of same-sex marriages than making the ones we have now work.

Let’s face it, we all have had our jokes and views of marriage. In fact, I’ve about heard them all as I draw closer to my own wedding.

“You’re life is over”

“You sure you want to do that?”

“There goes all of your fun”

And while the jokes are all in good fun, the reality is, some, if not many, truly believe those sentiments about marriage. Marriage has become a cynical topic for many. In fact, of the 40 percent that think marriage is becoming obsolete, a staggering 46% hope to marry someday.

Could it it be a case of envy? Who knows?

Or, could it be, and what I believe, that our culture has become so self-absorbed, that the thought of marriage is ridiculous?

Scary thought, but very much a valid point.

Nonetheless, marriage is rapidly on the decline in America, and for whatever reason, economical, sociological, or cultural, it is alarming.

I always told myself and my tag team partner that we would (and should) be more focused on developing a healthy and stable marriage rather than focusing on spending effort creating a “wedding event”. For a marriage is so much more than a glorified version of dating, or the status of a reception.

After reading Stephanie Coontz’s article and the results from a TIME/Pew poll, I’m afraid to know how many out there actually agree with that thinking.