Cavaliers Prove “The Decision” A Good One. 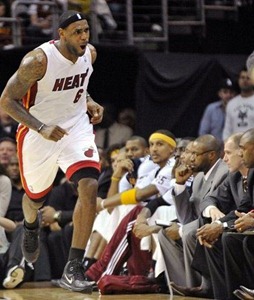 There is no question that LeBron James’ return to Cleveland epitomizes what the NBA product delivers – entertainment. The sheer drama in witnessing (no pun intended) his return was all that the NBA emphasizes, drama, intrigue, and amazing.

Last night we received all of those elements, except for one. Now, as I’m sure many of you DP devotees are aware of, I’m not too fond of LeBron James post-taking-talents-to-South-Beach. However, the manner in which he conducted himself in his return was flawless, and expected. He didn’t apologize for the way he left Cleveland. He dominated. He threw it in the face of the Cavaliers and the city of Cleveland.

After the first seven minutes of last night’s game, the final was decided. Miami was not only going to win, but win big. The Cavs’ effort last night seemed so lackadaisical, that it almost seemed as if they were in awe of James. As if they still were in shock he was in another uniform. Dare I say, they played as if they were scared of the self proclaimed, King James.

As crazy as it may sound, a win over the returning LeBron James could have been the biggest win in the history of the Cavalier franchise. Instead, they came up short, lacked effort, and added to the long list of sport tragedies in the city of Cleveland.

And for the life of me I do not understand the Cavaliers' lack of energy and heart.

LeBron James in leaving to play for the Super Friends and Co. team down in Miami basically said to his former teammates, “you are not good enough, and you never will be.” I understand in the world of sports today with friends joining up on teams, player unions, and free agency that players are closer than ever, even somewhat like a basketball fraternity. However, James left insulting their ability, their will, and most importantly their heart. 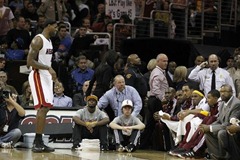 You would think that’s all the motivation they would need, right? Actually, it should serve as bulletin board material for the year!

How did they respond?

Proving LeBron correct in his “decision”.

In fact, the Cavaliers chatted it up with LeBron during the game, often laughing and joking as he often walked over to their bench as freely as he liked.

Where is the heart? The competitive spirit? Where was Coach Byron Scott, a throwback to when codes like this were not broken to tell LeBron to get his you-know-what away from their bench? Where were the hard fouls?

At some point - and let’s be honest, as many would have love to see it – I expected J.J. Hickson or Anderson Verejao to knock LeBron down on his “royal” behind. Sending a message to James, and to the city of Cleveland that hey, “we’ll return the support.” 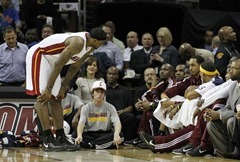 James sauntered into the lane as he pleased en route to a 24 point third quarter, finishing up with what seemed like an easy 38 points in three quarters. All that was left was for LeBron to do was river dance on the bench like he has done in the past during blowouts.

For a team that clouts, “All for one and one for all” as their motto in ads and on their website, this team got punked. Each and everyone of them.

In response to the loss, Daniel “Boobie” Gibson was quoted in a story on ESPN.com that James comments towards him, his teammates, and Cleveland Cavs officials during the game turned him off from James’ character and soured his friendship with the superstar.

Well that’s great. But it is a little too late to mount up the venom for James after he embarrassed you, your organization, and the city you play for.

March 29th, 2011 is the next return for James to Cleveland, however, that game will also be too late. You never get a second chance to make a first impression. On Thursday, all fifteen players on the roster made no impression at all, proving LeBron James and his “decision” to be a good one.