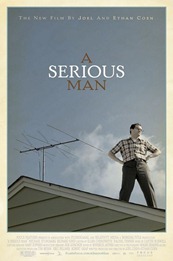 A professor searches for answers to his problems as his life unravels through various, sudden incidents.

Clive Park, an Asian student of Professor Gopnik, comes into his office and attempts to bribe Gopnik for a passing grade with a huge sum of money. While Gopnik attempts to tell Clive that he cannot receive the cash, Clive pretends to have no clue on what he is talking about.

A Serious Man is a very interesting and peculiar film. It is a film that is not for everyone, as it has a very dry type of humor that may be entertaining for a select few. However, if you are part of that select few, A Serious Man is very funny. From the crazy, wacked out characters, including the humorous junior rabbi who is obsessed with a parking lot, to many quip scenes, the film has various aspects that keeps Larry Gobnik’s troubles light.

Despite the humor, the film does indeed send an interesting message. With an interesting, and somewhat abrupt, ending (one that we won’t give away), A Serious Man reminds the viewer that no matter how many problems you have, the second you get over them, more arise. Also, it reminds us that sometimes, the problems we think we have, pale in comparison in what could be.

Nonetheless, A Serious Man is a film that is an interesting view for those with a certain type of humor. If you enjoy dry humor, it is a definite recommendation.