A Four Step Plan To Revitalize The Sport of Boxing 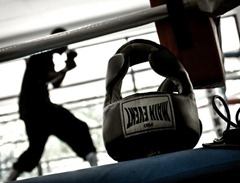 Recently, I’ve become hooked on the television drama, Lights Out, which airs on Tuesday nights on FX. While, many of you DP devotees know, I am never been one to follow any type of drama series, or much less, devote myself to a television program, the show has captivated me for more that it’s excellent writing and acting. Lights Out has been a series that is intriguing and interesting. The show, which is based around a former championship boxer that is now struggling to keep his family afloat after losing all his money, puts the viewer on the real inside workings of the boxing industry. 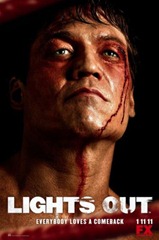 As an occasional viewer of Friday Night Fights on ESPN2 (I’m just giving away free promotional plugs in this post aren’t I?) along with the revealed boxing culture from Lights Out, I found myself wondering pondering about the current state of boxing. I remember the days growing up listening to my father, a former boxer, rave about upcoming fights, the potential fighters, and the different “dream” bouts he would love to see. I remember watching fights with him, learning about the nuances and science that is boxing, and taking in the passion that he has for the sport. It is the same type of passion I’m sure I will one day probably force pass on to my son regarding baseball, and yes, even pro wrestling (don’t judge me).

However, these days my father has very little interest in the state the sport is in right now, and from the crazy interest there is now in Mixed Martial Arts, boxing almost seems like an old tradition thrown to the way side, only kept alive by the old guard and die hard fans. Don’t get me wrong, anyone that follows the sport knows it is healthy enough due to HBO and other television dollars from becoming extinct. Yet, the big fights are now becoming few and farther in time. And that is the biggest difference in comparison to MMA, which is now producing pay-per-view events each and every month with quality fights and successful events. In fact, MMA is now the leading producer of buy rates in pay-per-view television, surpassing the long grip pro wrestling has had for years.

For a sport that has deep history and great tradition world wide, it has lost mass appeal, a connection to previous fans, and is becoming irrelevant for today’s sports enthusiasts. Due to this unique situation, I’ve decided, similar to my outlook on the NHL (A Non-Hockey Enthusiasts Look at Interest in the NHL), to draw out four things that can help revitalize the sport of boxing.

Uniform The Sport
Boxing for years has been very confusing for casual fans, and lately, even the hardcore fans. Who is the current Heavyweight Champion of the World? How many Welterweight Champions of the World are there? Sports fans love uniformity. Sports fans need uniformity. We need to know what the rules are. We need to know the protocols, the names, the camps, and the events. Most importantly, we need to know the title holders, and the real title contenders. The only way to accomplish such a feat is by placing the sport under one uniformed umbrella.

The best thing to ever happen to MMA was Zuffa buying the UFC and appointing Dana White as President. The sport sky-rocketed under a reform of uniformed rules and events, which caused fans to identify with the sport, and most importantly, an ability to follow clearly. Boxing needs a Dana White. Lets unify all of the titles, “organizations”, and fighters under one standard. One governing commission will do wonders for the sport, allowing for the best fights to happen without politics, and most importantly, continuing growth and expansion without the idea of bloodsucking “promoters”. With that said, it brings us to the next change…

Eliminate The Middle Men
Let me just say this, from the very beginning, there is very little chance of this occurring due to the amount of money television channels such as HBO are enticing fighters with, however, eliminating thus middle men will help the sport tremendously. One of the reasons my father has lost his love for boxing is due to the politics and constant fluff that occurs. With guys like Don King and corporations like HBO running the industry, we will always see fighters ducking other fighters, fighters being protected, uneven fight purses, and other questionable decisions. The sport has an ugly reputation, and as viewed in Lights Out, an even uglier way of doing business. “One guy takes the punches, twenty other guys make a fortune off of him” is a line I distinctly remember from the FX series.
Under a uniformed umbrella, a sole governance will be the match maker. One of the reasons for MMA’s growth, and honestly, one of the very reasons I enjoy MMA, is due to the fact that the UFC, and even smaller competitor, Strikeforce, give you the very best fight at that very moment. With middle men involved, that rarely happens. How long have we been waiting for Flloyd Mayweather versus Manny Pacquiao? Too long. Anyone still holding their breath for that fight? Yeah, I didn’t think so.

Market The Boxers
This is pretty much a given in any sport. Marketing is vital to the brand and sport of boxing. Fans need to know who the participants are to feel attached to the product. It is one of the reasons the NHL struggles, and why the NBA is considered such a great experience. Connection to the boxers would do wonders. In the past, boxers were allowed to have personalities, to express themselves, to give fans a chance to get to know them. We saw it of course with guys like Muhammad Ali, Joe Frazier, Mike Tyson, Sugar Ray Leonard, Rocky Marciano, and Lennox Lewis. All popular boxers. All with different personalities. All, of course, well known to even the casual fan.

It’s a subtle aspect the UFC does so well. Before every fight, there is a video package highlighting both fighters, their training, and a few words on the upcoming fight. Today, boxers are relegated to simply standing face-to-face for the typical showdown pose, with promoters, producers, and other forms of hype-men doing all of the talking on the upcoming fight. It seems the product has become more about attempting to sell you a product rather than causing you to purchase the product. There is a big difference. The way to creating the latter, is by allowing your fan base to learn and connect with the boxers.

Create Events
Finally, boxing needs to create events. Sure, they have many pay-per-view events that do well, however, it is usually an event billed for its main event. Boxing needs to make it’s events larger, its under card stronger, and most of all, make their events more entertaining. Because at the end of the day, that is the business they are truly in.

Can all of these changes happen? Sure. Will they happen? I have a better chance of headlining a pay-per-view event. However, they are just mere suggestions from the experience of watching a former die hard turn away from the sport, and witnessing a new generation falling in love with the excitement of MMA. Whether the four changes of having a uniformed sport, eliminating the middlemen, marketing the boxers, and creating larger events can help bridge that gap into the future remains to be seen. However, one thing is for sure, the sport of boxing needs to find a way to regain the allure it once knew, and most importantly, reinvent and revolutionize itself if it plans to stay relevant.