“Finally, The Rock Has Come Back…Home!” 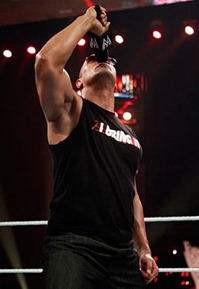 “Finally, The Rock has come back…Home!”

Despite the usual catchphrase for The Rock, it is a statement that every single wrestling fan has longed to hear ever since he left for Hollywood seven years ago. And because of his comeback, and due to the title of this post, we here can follow that up with a…

Ok, I’ll calm down. I’m just excited the Rock has come back, period.

Last night when that infamous theme song beginning of “If ya smelllllll…” hit over the airwaves, there was a sudden jolt of excitement, goose bumps, and shock for yours truly. As The Rock came through that curtain, that excitement tripled. Albeit being much older, yet, very much in shape, The Rock stood before 19,000-plus fans in Anaheim who gave him a 3 minute standing ovation, including the millions (and…millions) of wrestling fans at home who I am sure felt like this was all a dream.

As this was happening, I sat on my futon in full gaze at the television. Yes, the Rock is entertaining, yes he is what he says, "the most electrifying man in all of entertainment”, and yes, he has a special place in the heart of wrestling fans (more on that later). However, viewing his return made me feel like I was fourteen years old again. Cheesy? Of course. However, it’s not something I wouldn’t expect a non-wrestling fan to understand. Or even a newer fan to that extent.

This was evident as I sat there gazing and hanging on every single word The Rock said,  my tag team partner stood there wondering, with our wedding now less than eight months away, what she was indeed getting herself into. And of course, that was right before I decided to ask her a random question, then cutting her answer off with the proverbial, “It doesn’t matter…”

[Blog Sidenote: How ironic is it that the woman I call my tag team partner, has very little care for pro wrestling as a whole. After all, to her, Monday Night Raw is simply two hours of not being able to watch “better things". But I digress.] 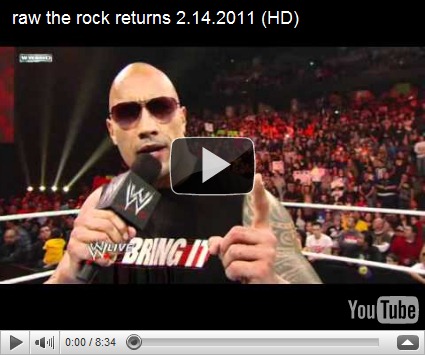 However, the fact is, only a pro wrestling fan can truly enjoy a moment like that. Pro Wrestling fans are very similar to a society within itself. We are true to the product. We have opinions on the business. And when we meet up with other loyal fans, its exciting. Most importantly, much like any society, we stay loyal to those who became known from us – because of pro wrestling.

Unlike other sports and entertainment facets, it is rare for a talent to receive the type of homecoming that Wrestlers do, especially, after an extended leave of absence. Very few, in their art form, can appear in the present and make their fans feel like it is old times once again. And finally, very few can have a legend in their industry return after seven years away, and still perform as well as they ever have, all while creating new found excitement in the entire product.

Only in this society that we call pro wrestling.

A society, which last night welcomed home and celebrated one of its own in The Rock.