Behind The Core: A Look At The First Group Of "Future Foundation" 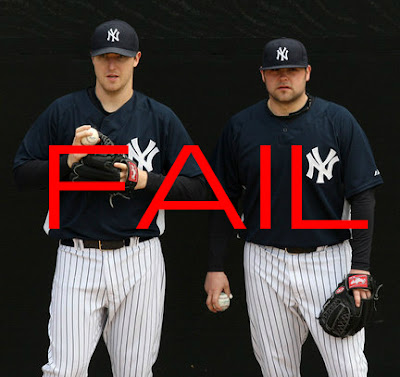 Every Yankees fan, at least the real ones over the age of 25, should remember the name Kevin Maas. If you aren't familiar, Maas was once touted as the next big prospect for the Yankees during some lean years when talent - any type of talent - was very much needed.

After a lot of hype and tons of expectations, Maas never amounted to much. And the Yankees can now hide the disappointment of Maas behind the once-in-a-lifetime occurrence of a couple of home grown studs that came through the system and helped them build a dynasty. Mariano Rivera. Derek Jeter. Andy Pettitte. Bernie Williams. Jorge Posada.

With those names now either enjoying retirement or close to having the sun setting on their careers, the apparent void (in terms of youth and future) in many areas on the Yankee roster depth chart is glaring. Where are the next batch of Yankees to carry the torch going forward?

The first group that had to carry this burden, at least in my eyes, were the highly regarded trio of Phil Hughes, Joba Chamberlain, and Ian Kennedy. The supposed future of the Yankees rotation.

All three were projected and expected to make up 3/5 of the Yankee rotation for years to come. They weren't just hyped prospects, but they were BIG time prospects.  Baseball America, on-everyone's-radar type of prospects. Especially, Phil Hughes.

As of this writing, none of them are in the starting rotation. OK, well, we'll give you Hughes who has been in and out of the rotation.

But as the Yankees struggle with injuries, payroll cuts, and ultimately getting younger, they need to look no further than their lack of developing talent from within. The very key aspect that helped get them to four World Series titles in five years, not to mention the impressive streak of the lights being on in October at Yankee Stadium for the last eighteen of nineteen years, is something they've failed at recently.

As we near the end of that core group, this group of Chamberlain, Kennedy, and Hughes marks the first batch of prospects who can now be given definitive grades. The jury is out. No more use of the word "potential". Cut and dry, it's stunning to see where this group started, and where they stand now in Yankeeland.

Chamberlain went from an absolute stud out of the bullpen with high heat and that devastating slider to that guy. You know, the human white flag. The guy your manger brings in to save the rest of the arms in the pen, yet, is also hoping he could catch lightning in a bottle on the old guy. The old Joba.

That old guy ain't coming back.

Not after the midges happened in Cleveland. Not after the flip-flopping from bullpen to rotation and vice-versa. Not after those wacky Joba rules. And not after that elbow injury which left Joba never to be the same again.

Kennedy showed flashes as a Yankee, then was packaged as part of a deal for Curtis Granderson (So maybe Kennedy did work out?). In Arizona, he had one dominant year in which he won twenty games and competed for a CY Young. But he has since been dealt again to the Padres as he tries to duplicate that season.

And there is Hughes. Ahh, Phil Hughes. I'll be totally honest, I am was a big fan of Hughes since day one. If two strikes equaled an out in baseball, Hughes would be the best pitcher in baseball. I have never watched a pitcher in my lifetime consistently get ahead of hitters 0-2, 1-2, and suddenly become unable to get the out.

But that's Phil Hughes. That's who he is. Inconsistent. And the only thing he's consistent at is giving up home runs, something he has become notoriously prone to do.

It's tough to say these guys are complete failures as once again, they are still in the big leagues, and two of them (Hughes and Chamberlain) have helped the Yankees host another Commissioners Trophy at 161 and River Avenue.

However, as far as the first wave of "foundation" pieces after that legendary core group, this group left a lot to be desired. In 2008, the Yankees hoped Hughes, Kennedy, and Chamberlain would lead the Yankees into the future. On opening day of 2014, it is very likely all three will be wearing different uniforms, hoping to capture something they once had - or maybe, something they really didn't.

Dellin Betances, Manny Banuelos, and Gary Sanchez - all eyes are now on you.