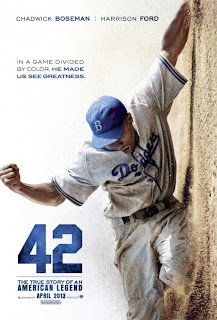 The story of Jackie Robinson's experience in Major League Baseball under the advise and guidance of Brooklyn Dodgers team owner, Branch Rickey.

While on a road trip in Cincinnati, Pee Wee Reese, who was worried about a death threat regarding his impending participation in playing with Robinson, went over and threw his arm around Robinson at first base so he could make a statement to everyone in attendance.

"Maybe tomorrow, we'll all wear 42, so nobody could tell us apart."

42 was an average film. I hate to say that because the story of Jackie Robinson is a phenomenal one, but one which I just don't think this movie captured. While it touched on the racism and some of the troubles that occurred in Robinson's life, the film felt like it sugar coated a lot of the story for safety of a good feeling. 42 felt empty and shallow in it's purpose and felt like a movie afraid of digging up a part of American history that some are uncomfortable with.

By no means is it terrible, 42 just seemed like a let down, especially for this baseball fan. Nonetheless, it does provide some must-see things such as Harrison Ford's effort as Branch Rickey, the authentic uniforms, and the CGI cinematography in replicating the old ballparks.

All in all, 42 is OK. Could have - and should have - been much better, but overall, still a decent watch.