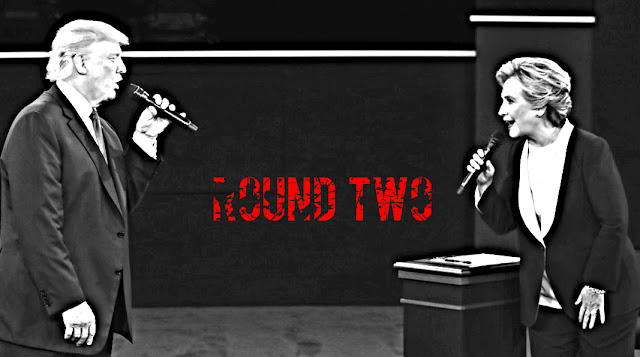 Disaster. What an utter, and complete, and ridiculous, and outright embarrassing disaster this second debate was. And here I was, as stated in my thoughts after the first debate, championing this second debate  as the one that should bring some substance to the forefront for this election. I was not only wrong, but this debate completely pushed me further into the abyss in despising this election, and both of these candidates. I'm completely torn, as I want this election to be completely over, but I don't want any of these two anywhere near the title, President of the United States. But, we're going to have to swallow that pill.

Nonetheless, as always, here are my thoughts on last night's debate:


- Where else should any Presidential debate begin with none other than tapes of a candidate demoralizing and objectifying women? After all, why not, right? I'll say this, and it's obvious, the tapes are sickening. Quite frankly, Trump has been saying this sort of stuff about various groups for his entire campaign. I'm not sure why this tape suddenly made such an impact.

Also, the strategy in using women who allegedly were assaulted by former President Bill Clinton is just as ridiculous. Two assaults, or some one else's transgression against women doesn't make yours excusable, or normal.

- Again, I really, really felt the town hall format would be an interesting one, and a make a break for both sides. Especially considering that Trump for the most part, has held mostly rallies in his campaign, hasn't truly answered questions from the public, and has struggled getting a plan across effectively in the first debate. It would also place Trump out from behind a podium, and in the forefront of having to show empathy in questions he hasn't effectively show yet. In fact, this came to fruition as both communicated differently based on body language. The Washington Post has a great article breaking this down.

Again, these two are the epitome of different styles making the fight. With all of the pressure on Trump, Clinton really didn't have to push the agenda on the aforementioned "Trump Tapes" heading into the debate. But it came up quickly (thanks, Coop, more on them in a bit), and her going to the well on "Fact Checking" was a poor response in a fight she had no reason to enter. I thought Trump did a tremendous job in deflecting the obvious elephant in the room, and muddying up the debate, after all, it's his specialty.

- Again, Clinton needs to stop with the plug for her website. It's rather ridiculous. It's a poor look. A very poor look. And no one cares.

- CNN did an absolutely poor job on not only mediating the debate, but creating a nice flow which town hall formats organically have. With so many undecided voters on stage, there is no reason we needed to hear Anderson Cooper and Martha Raddatz attempt to drill Trump with hard questions as well as force him to the ones then pitches. In fact, he got into it with them, and again, just a bad look.

I still don't understand why we don't just cut their microphones. That's the type of gimmick these two need. So sad.

This debate should've had a steady flow with the majority of questions coming from those on stage. My pulse on this election is that there are those voting strictly on party lines with blind support for their candidate, many voting for Hillary for the sole reason of voting against Trump, and the rest are tremendously undecided. This debate should've been about the undecided voter. All about them, and nothing else.

- Deleted emails and unreleased tax returns - I don't care where you fall in this election, that's all the voting public has with under three weeks to go. And if you're one of those voters still slinging the same tired rhetoric at the opponent to make your choice look better, then shame on you too.

- I'm tired of the numbers and ridiculous statements about helping "inner cities". Please, tell me how you plan to do so! HOW?! Because honestly, I don't think any of these candidates do. If they did, we haven't been able to hear it.

Because, after talking about where e-mails are, and what has been declared on tax returns, international affairs are the only issues being raised consistently in this debate. Rarely any education, social issues, or many of our domestic affairs. But as Trump referenced last night, the tapes aren't as bad as ISIS.

- As for remarkable statements, nothing shocked me more than a Presidential candidate hearing a statement from his running mate and then stating, "we have to talk about that...I don't agree with that." Ummm, what? Trump, you be you, man.

- Finally, kudos to the gentlemen who asked the candidates to say something nice about one another, to which neither could outright do. Maybe she really despises Trump, and it's her right, but Clinton's response was downright unfortunate. She attempted to spin it without giving praise to Trump, but easily caught a loss while doing it.

- At what point do all of us start a movement to get Gary Johnson and/or Jill Stein on a stage with these two?

Back to fighting about scandals. We started with #sexualassault and emails. Now we're to #Wikileaks and tax returns. America can do better.
— Gov. Gary Johnson (@GovGaryJohnson) October 10, 2016

All in all, again, disaster. I found myself rifling through my Twitter feed during the debate, and outright losing interest with the constant bickering, jabbering, and child-like spat that did nothing but waste time. Ken Bone won this debate, solely because the guy is now an internet legend. The memes coming out were the only thing that got me through it.

If you forced me to choose a winner, it'll have to be Trump. Not based on winning actual arguments, but because he managed to walk out of the debate in what looked like a chance for Clinton to put this whole thing to bed. Instead, he changed the narrative from the mess of week he was having to anything else, like, how bad this debate was. And he lied alot - ALOT - to do so. Just check some of the facts if you think I'm being biased. Regardless, I don't think he gained voters last night, but he survived, and that's a HUGE win.

And yes, Clinton is the biggest loser here. Debating a calm and controlled debate was the key tonight. One filled with empathy for women, and everyone Trump has put in the line of fire with his antics. Simply allowing the recent backlash to do the work for you should have been her strategy. Why not ask him why Republicans are removing their endorsement for him? That's a big weapon she never unleashed.

All she had to do was show poise, stay committed to allowing Trump to gunsling his way through indefensible questions, and let the debate take it's course. She instead played it too heavy, got into the mud with Trump, became just as absurd, egotistical, and petty, and even regurgitated several points from the first debate.

One of the worst political debates I've ever seen. Not looking forward to the third one, but you know, it's kind of important. I guess we'll see what happens next.