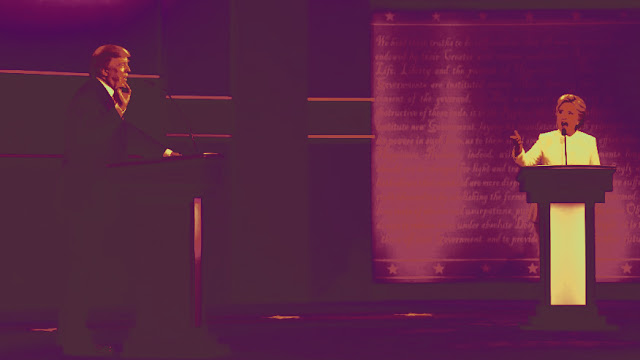 Well, this trilogy comes to a close, and for me, I cannot wait. As stated from my last two posts, everything about these debates have been utterly ridiculous. The only word that comes to mind to accurately describe a debate season I geek out over has been this - disaster.

Nonetheless, it's the last one, and to be fair, it was the best one. It really was. For some reason, it was the debate that had the least build, the least drama surrounding it, and one in which both candidates needed to really make their push for election day.

My goodness, I know we joke about it as a society, but really, one of these two individuals will be President very soon. I still can't wrap my mind around that.

Nonetheless, here are my quick thoughts on this final debate:
- The format was absolutely fantastic. I cannot express how much this format worked, and what it allowed the candidates to do as debaters. Of course, Chris Wallace really aided in this (more on that in a bit), but format allowed for some hard hitting questions, some nice back-and-forth debate (greatly lacking in this race), and the ability to address some issues. Well done.

- Chris Wallace, to me, won the debate. Weird to say, but he was really good tonight in keeping the candidates on topic (no easy task with these two), asking some very difficult questions, and most of all, was VERY fair. Easily the best moderator of the three debates. No question.

- Much like the first two debates, the key to the entire thing was composure for both candidates, especially Trump. He stayed calm and really debated well for the first fifty minutes and then he lost his cool. Which seems to be what Clinton's camp has been planning for in all three debates. "Just get Trump to go off the rails" and "Avert E-mails and Bill Clinton Harrasment questions" must be on the whiteboard before they take the stage.

Regardless, I was impressed with Trump within those fifty minutes on handling the always tough 2nd Amendment issue, and even had a nice call out of Clinton averting questions. He didn't do it articulately, but it was a nice tactic, and he used it well.

Unfortunately, the sparring for points round-by-round ended, as Clinton landed the big right that rocked Trump and caused him to lose his you-know-what. Putin! Putin! Putin!

And from there, Trump went off the rails. I'm sure the Clinton camp started high-fiving at that very moment.

- Trump also did himself no favors with the "Bad Hombres" line, calling Clinton, "A nasty woman", and constantly interrupting her with soundbytes of "wrong", "nope", and "you're lying". It furthers the narrative on him that he is unfit to be President, and adds legs to the fact that he isn't respectful of women.

It also makes everyone very excited for one more SNL skit. Damn, Alec Baldwin and Kate McKinnon have been good in those roles. So good.

- Clinton stating that Trump "choked" and didn't bring up "The Wall" with the Mexican President was a great line in which he never responded to.

- Unfortunately, for Republicans, a better orator could have really stuck it to Clinton on the way she dances away from questions. She has found ways to spin her e-mail situation, but when Trump was good Trump in this debate, he really hammered her regarding the Clinton Foundation, and why they continue to accept money from countries who discriminate (or worst) against the same people she claims to be fighting for. Again, as a debate geek, political beliefs aside, I was pumped here. Then bad Trump showed up, talked about the election being rigged, possibly not EVER conceding, and it all went down the toilet.

Though, the best part of all three debates was both candidates going back-and-forth on their experience in the open discussion following the economy question. It was good debate. Something not found at all between these two very much.

- Finally, again, has Trump ever been to an "inner city"? By the sounds of his descriptions, I utterly live in a war zone. But hey, it's not Chicago, to which is the worst of the worst for everything.

On a more serious note, I was thoroughly disappointing to not hear more about social issues during the three debates.

All in all, the winner in this one was Chris Wallace. If you forced me to pick a winner, I would say Clinton by nature of walking away as NOT the headline, as Trump was with his "Bad Hombres" statement, his claims that the election was rigged, and that he would "keep us in suspense" if he lost the election on whether he would concede.

I'm so glad these are done. Sadly, We're going from a outstanding and charismatic speaker and orator in current President Obama, to one of these two. State of the Unions are going to be rough moving forward.

With that said, this debate changed nothing, especially when I felt Trump desperately needed a big night in order to win over some voting sectors. But who knows, maybe my pulse is wrong on this. Whatever ends up happening, for me, all three of these debates did more damage to my opinion and views of the candidates than it did beforehand. And that speaks volumes of where this race is, and has gone.