NBA MVP Race, and Right To Be Called "Superstar" 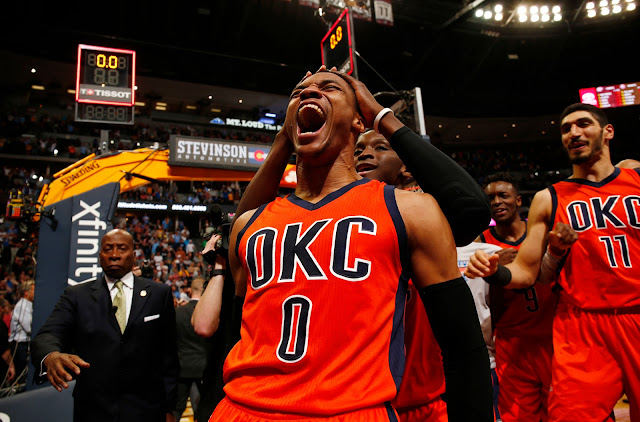 There are many who very worthy of the NBA's Most Valuable Player for this season. A viable argument can be made for LeBron James, Kawhi Leonard, James Harden, and Russell Westbrook, all players who bring forth impressive resumes as candidates for the honor of the NBA's top award.

For me, my selection for MVP is indeed Westbrook. Don't get me wrong, the others, as stated above, anyone can make a very good case for. In fact, you can even go as far as saying LeBron James is the game's MVP every single time he touches a basketball court. I'd be totally cool with that if that were the situation and angle you want to take in this role.

But back to Westbrook. I am completely buying in on the season he's put together. Everything about this season, and everything he has done screams "valuable" in my eyes. The impressive triple-double record, the super-impressive accomplishment of averaging - AVERAGING! - a triple double, and the super-duper impressive task of carrying a roster, franchise, and city on his back in the wake of Kevin Durant's departure.


And while I do agree with James Harden's comments that "wins" and "winning" should surely play a factor into the MVP race (Harden's Rockets are set to finish with 54 wins, more than Westbrook's Thunder at 48), again for me, there is just that impressive ability of what a triple-double represents - a holistic contribution to one's team - that, in my eyes, puts him over the others.

Of course, Rocket's general manager, Daryl Morey took to Twitter to back his guy. Though, will say, he has a point. More on that in a bit.


Also, admittedly, Westbrook is one of my favorite athletes to watch. The dude is so explosive and athletic. You combine that with his fiery, almost furious-like, demeanor, and it just makes for great entertainment. For an awe-inspiring experience.

With that said, if there is one thing I believe this race, discussion, and overall debate does, is shed light on the NBA's entitlement culture it fosters and presents. A league built on and around stars, too often we hear the phrase "superstar" used for players. I'm sure you can think of a few not worthy of the title.

This year's race puts some perspective on the phrase, and how it ought to be used. In a culture now built around AAU basketball's ridiculousness, celebrating "tanking", and a lousy All-Star game exhibition, this MVP race really rises those who are indeed invaluable players to their teams. Players who make their teammates better and win. Players who are winners. Not just the best player on a given team.

When Kevin Durant leaves town, Westbrook continues to carry the burden to make sure his team does just that - win. Because that's what superstars do. That's what MVP's do.

Regardless of who your MVP candidate (or favorite) is, chances are, between James, Leonard, Harden, and Westbrook, you can't go wrong. But what's becoming clearer is that there are superstars in this league, and pretenders. And it's time the NBA culture begins to truly acknowledge these players in a classification of their own.