Wrestlemania 33: Average, Memorable, and Stuff in Between

April 03, 2017
After this Wrestlemania faded to black, I had the most difficult time remembering or recollecting my thoughts on the entire show. Wrestlemania 33 by no means was terrible, however, it wasn't well, special. And from the reputation that precedes the event, and quite frankly, hearing JBL discuss having a "Wrestlemania Moment" every seven seconds, as a viewer and pro wrestling fan, the standards are pretty high.

After all, it's the biggest show of the year.

Nonetheless, all I can remember is The Undertaker, and him finally walking away for good. And really, I strongly believe in ten years when we do look back upon this Wrestlemania, that exactly will be the consensus thought and memory. Whether that was the plan of the WWE is up for debate, but one thing is for sure, Wrestlemania had that feeling of being, "not bad."

Regardless, here are some quick notes and thoughts on the show:

- What has become custom with me, I'm blown away by the WWE's production. It's the absolute best. I say it ALL the time, and this time they outdid themselves - again. The stage/set/ramp and everything other-visual for this event was downright awesome. Just beautiful.

I loved the long ramp, and how it worked into the entrances. Though, I could have done without the whole Orton/Wyatt bit in the ring during their match. More on that later.

- I get why they do the pre-show kick-off, but man, you have to wonder where is the point of diminished returns on a crowd for Wrestlemania. At some threshold, it wouldn't surprise me if Wrestlemania becomes a two-day affair. Seven hours of pro wrestling is aggressive. I say that, but guess who still watched in some fashion most of it? Yup, me. You got me again, Vince.

- If you follow this blog, you know that I'm a HUGE AJ Styles fan. I've been a supporter since the dude debuted in WCW with Air Paris, before really becoming a fanboy of his work in TNA/Impact.

With that said, I just felt he was wasted in this whole ordeal with Shane McMahon. It was an entertaining match, but for me, throughout the entire thing, it just carried a cloud of unbelievability. I'm just not buying a 40-year old commissioner giving the dude that not too long ago defeated John Cena, a run for his money (no pun intended).

I just felt a program with just about anyone would have been better. Styles vs. Ziggler? Anything but Shane McMahon. Just my opinion...

- Anyone else found it mildly ironic that two Canadians were fighting for the United States Championship. Ha! No? No? OK.

This one, like a few of the matches tonight ended awkwardly and added to the "satisfactory" review.

- The RAW women's match was my pick to steal the show tonight. They didn't do that, but they definitely were entertaining. Again, satisfactory. Bayley picking up the clean win gives her a solid over on Charlotte, and should settle things in a new direction tonight on RAW.


- The RAW tag team match was indeed the match of the night for me. The return of the Hardy Boyz was a nice touch. Them winning right away was indeed quite shocking. Especially after going through a ladder match the night before at ROH with the Young Bucks. The win also gives them the Impact, ROH, and now WWE tag team championships in less than 30 days! They were right, in all of space and time! AHHHHHH!

But you know, the WWE only counts...the WWE. So, as Michael Cole said, "they look to be in tremendous shape after over seven years of being out of action." Classic WWE.

But I will say this, as much as I loved the "Broken" gimmick in Impact, I hope they return to their Hardy Boyz persona for WWE nostalgia. It's a better fit in the long run. Again, just this guy's unasked opinion.

- I really don't like when pro wrestling companies tell me something is unsanctioned, only to have it appear just like all the sanctioned stuff. I know, it's wrestling, but still...

Triple H always has something up his sleeve for a Wrestlemania and this year's was well...weird. The whole bit with the giant tricycle and police brigade was awkward.

Regardless, Rollins and Trips was another match I enjoyed on this card but not necessarily something that will be memorable. I really did like the finish, though.


- So, was this whole Cena/Miz angle just so Cena can propose to Nikki Bella in the middle of the ring at Wrestlemania?

And doesn't that just play into what Miz and Maryse were saying? I'm happy for them, but the whole thing did seem really fabricated. I'm sure this plays into Total Bellas for a wedding episode for May sweeps or something like that.

- And then there is Orton and Wyatt. I really disliked everything about this feud heading into this match. And even then, I wasn't a fan of the match. The weird bug projections, now looking back on it, was just incredibly weird. Orton wins. Eh.

- Lesnar v. Goldberg was much better than I expected it to be, which wasn't much. I loved the hard hitting nature of the match, and all of the signature and finisher moves being hit early. It's like they started a video game with their characters holding multiple finishers already.

With that said, Brock got his revenge. Is Goldberg now gone? Where does Brock go from here? I have no idea what to expect from either. But I will say, it's rather sad to see the number of older talent the company is relying on for their top show. They CAN do better.

- And lastly, the Roman Reigns win over Taker was a rough go-around. You can tell Reigns tried his best to carry the big fella, and you can tell, as always, Taker put some effort into it. The match, much like most of 'Mania was just there. However, the post-match with him throwing on his robe and hat to ceremoniously take it off and leave it in the ring signifying his retirement was gold. Absolute great stuff for a legend who outright deserves that, and possibly even more.

Now, is this a hard retirement? Who knows? We know how wrestling retirements often go. Especially, when Vince and co. push the panic button when ratings drop. But I do have mixed emotions on it all.


On one hand, I'm glad he's walking away. Again, it's rough as a fan watching Taker go through the motions, or limp around gingerly in a ring while still trying to get out (and over) his signature moments.

At the same time, I wouldn't mind seeing a retirement where Taker is placed in multi-man matches for nostalgia purposes, but also to aid him physically in matches. Though, who knows if he wants to hang on like that? But, imagine a returning Undertaker coming out as a mystery partner at the Survivor Series? Imaging him getting the hot tag and having a short burst to run through his signature moves? That would be awesome. 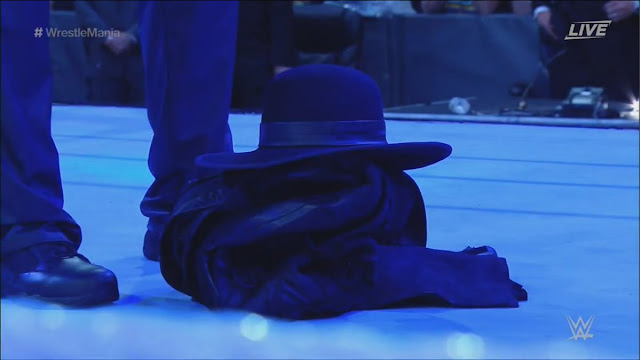 Either way, another piece of my childhood sank as Taker was lowered into the staging. It's hard to imagine I was seven when Brother Love debuted this guy, who ended up defeating Hulk Hogan, whom I despised (and somewhat still do) at the time. I'm now turning 32, and I've watched this guy age on my television screen for twenty-five years, as I developed and matured on this side of the screen. It's rather crazy to think about.

Nonetheless, the moment was done right. And for me, it's what this Wrestlemania is, and what it will be about a few years from now. Wrestlemania 33, you were so average. But you gave us a cool set, the signal of a full investment in Roman Reigns, and the chance to wrap our minds around the end for the Undertaker. And yeah, some stuff in the middle too.