Porzingis' Concern is Cause For Concern 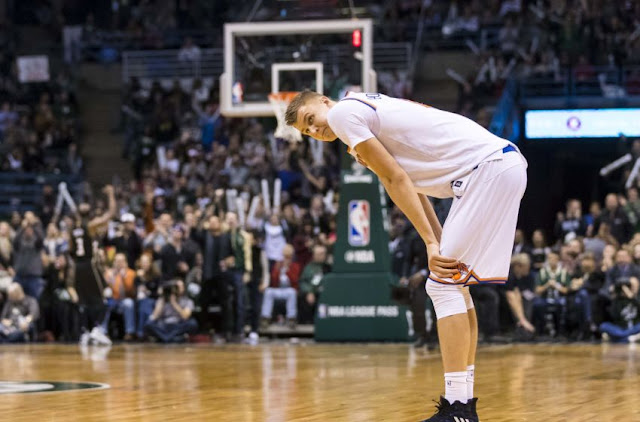 Here we go. Strap yourself in for yet another development in this utterly disastrous New York Knicks season. I often wonder if this franchise were anywhere else BUT New York, would it even survive?

Regardless, after giving us garbage all year, even exit interviews and the end-of-the year process has given us Knicks fans more New York Knicky things to digest. First, Phil Jackson is back for the remaining two years on his deal. Yay. That was utterly sarcastic by the way.

Then, Jackson went all President Trump on us by dropping the bomb on the topic that has been danced around for the passed three years - openly admitting he's not in the corner of Caremlo Anthony in any way.

I think with the direction of our team, he would be better off somewhere else.


Then we get Carmelo's Instagram response, because you know, social media is the new way to handle issues, and is always the best way to vent frustrations in a passive-aggressive way, though, it's not so subtle, or really passive aggressive. But whatever, to social media we go!

And then, if that weren't enough, my main guy, Kristaps Porzingis missed his exit interview on purpose because of frustration in how the organization is currently run. RESIST! And for the record, Porzingis "liked" Melo's Instagram photo. DRAMA!

So yeah, who needs playoff basketball when we have all of this going on?!

And we haven't even discussed potential draft picks.

On a more serious note, and as serious as I can be regarding this utter dumpster fire of an organization that holds my heart hostage, the Porzingis news is the one that really gives me concern.

Of course, as you all know, I love me some Porzingis. I love the unicorn. I openly admit, I love more the idea of him. He represents hope; and the future; and all life after Melo; and all things of us NOT being New York Knicky.

But the idea of a second-year, twenty-one year old already understanding that this isn't the way a professional club should be run, and most importantly, is so upset about it that he has openly - and defiantly - ignored company protocol in a "so-what-are-you-going-to-do-about-it" manner by skipping all exit interviews and flying back to Latvia, is a HUGE red flag.

And can you blame him? Derrick Rose missed a game with no reasoning and got his starting spot back with no ramifications. Brandon Jennings asked for his release, and openly complained about the Knicks locker room more so than it's talent or ability. The tug-of-war remains around the triangle offense. And yes, Charles Oakley gave his all for the organization, and got tossed out the backdoor along with the expired and overpriced concessions onto Seventh Avenue.

For Melo, this is just the tip of the iceberg of what is now shaping up to be one of the most empty "superstars" this city has ever seen. I've completely soured on Melo this year. And again, I'm now onboard the Melo needs to go side of the debate.


There is also Phil Jackson, who appears to be running this organization like he is on an internship. The way in which he is trying to move Melo is either personal, or one in which he realizes the only way to get Melo to waive his no-trade clause - a contract HE gave to Anthony! - is by having him become so annoyed, that he will want go elsewhere.

Only us. We do such New York Knicky things.

Oh yeah, and there is Joakim Noah. Freakin' Joakim Noah, who makes me not hate the contract of Jacoby Ellsbury (of my New York Yankees) as much. Wrap your mind around that one.

For me, with all of the drama going around, the irony is that for a fan base that begged Jim Dolan to stop meddling in basketball affairs for years, is now looking for him to intervene. Naturally, when it comes to being there for Knicks fans, Dolan misses the mark. I hope JD and the Straight Shots aren't this mismanaged.

Either way, strap in Knicks fans for a helluva summer. If Porzingis of all people, who represents all that is good, and right, and hopeful for Knicks fans is utterly disgruntled, things just went to a new level of bad.

When summers were once a break for this drama, it seems summer will be a continuation (possible culmination) of it all, now making all seasons open for New York Knicky-ness.