My Heart is Full 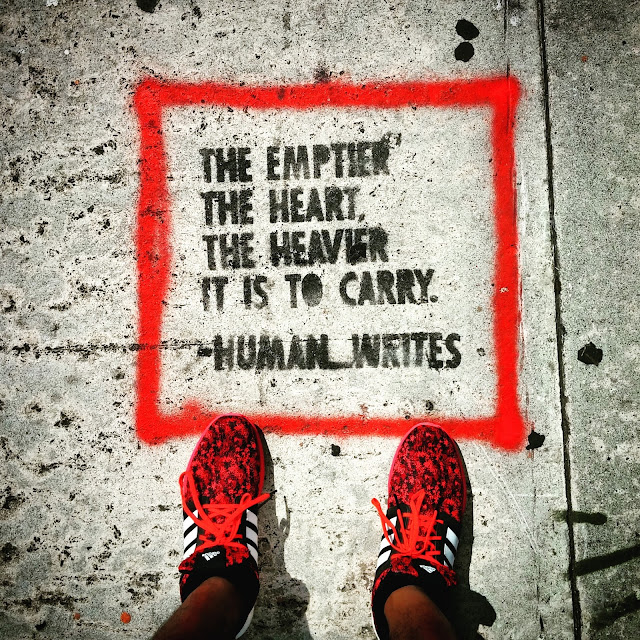 Hey, I'm back! I have returned! While I've continued posting over the last few months on current events, especially via the Sunday Sunday Rundown (which I love doing), along with a few posts here and there, truthfully, I've gotten away from punching the keys from the heart.

There have been a few things going on, as life typically throws our way, that took away my time from the keyboard. And if I did have time, it was spent decompressing. Recently its been work (as always), studies (a recreational pursuit of a second masters degree - of which I've yet to thoroughly post on) and honestly, after the political and social climate that was 2016, I've been trying to decompress from all of it. It's been five months now... and its still tough. 2016 sucked for social justice. But, such is life.

Regardless, I sit here punching the keys today with a full heart. As is always every May, a part of me goes through the mixed emotion of joy, sadness, encouragement, and reflection as another academic year completes, and I take a look at my student's holistic progression, especially, the seniors.


But while all academic years are different - this being my fifth one in higher education recreation - this one has been special for me. Its been my absolute best year as a higher education rec professional and student affairs practitioner - bar none. I've developed innovative programs that are now being emulated nationwide, and creatively and logistically, the whole year just clicked. I can't really explain it any other way. It just clicked in the way championship teams mention as they reflect upon their season while spraying champagne all over themselves. It just felt like good things happened along the way. That this year was special.

Enhancing that feeling as I reflect was my recent nomination and selection for a prestigious award at my institution. An award that requires numerous nominations, followed by a vigorous selection process - and boom, there my name came out among the traditional five selected. There it was in the mass e-mail to the entire institution. I'm humbled because of it. Truthfully, I still have the e-mail and re-read it just to be sure this is real. To have that giddy feeling and produce that smirk on satisfaction on my face.

What really gets me is when they say "thanks for everything", and the look in their eyes fills in all the missing words they are afraid to communicate.

Or like I heard tonight, "this year has literally been the best year of my college experience because of this program and community."


...it's a tremendous feeling to see potential in another human being, and to not just pull it out of them, but to be shocked about the surplus they had to offer.

And then there is my student assistant this year, who believe it or not, was moments away on her third day of being employed from it being her last. It's quite the thought to think about that day where I lit into her in a conference room, just before saying these final words giving her a pardon, "you've got one year to earn my trust back. Make it right."

Yet, a full year later, not only did she "make it right" and more, she has been a big part of this successful year for me and for my program. We've developed this odd relationship and connection over the year, the kind that would make a weird feel good coming-of-age film for our two characters.

But truthfully - and cliche plotline aside - I've seen tremendous growth in her (especially leadership) in this one year, and knowing her story (which I won't go into) and where we started in August, it's a tremendous feeling to see potential in another human being, and to not just pull it out of them, but to be shocked about the surplus they had to offer.

And oddly enough, I know, that she knows all of this too. It's a weird sense of security and trust that is so hard to explain. One that I won't even attempt to.

Its the same kind of trust that was on display when I showed up to a group outing by my entire staff supporting one of our own who was starring in a production. Not only did they all come together throughout the year, but they wanted me to be there, and when I did, I was met with hugs and a sense of ease that my presence was important. It meant more to them than me that I was there.

This group that I put together somehow, lead by me - this individual who once never thought he was meant to lead, and was okay with following - changed lives. Still gets me. Again, I'm humbled. Amazed. Satisfied. Motivated.

Its been that kind of year.

Strangely enough, I rewatched the entire Friday Night Lights TV series back in August prior to this year. Thinking about it now, those lines from Coach Taylor really describe how I would describe this 16-17 academic year, and most importantly, how I feel...