I Wore a Porzingis T-Shirt Today 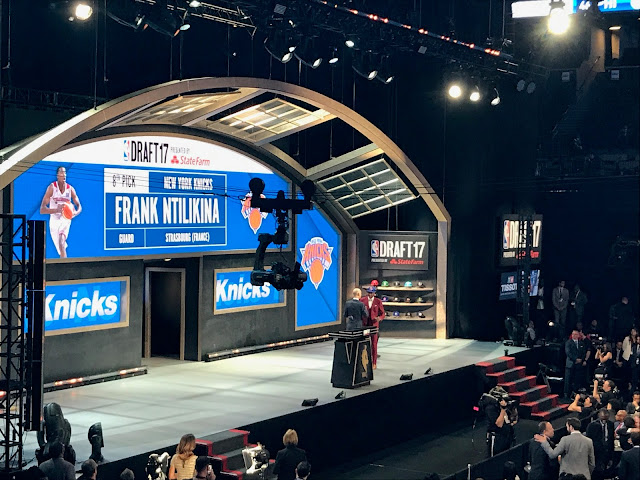 The comments came all day long, and from everywhere.

"Nice shirt! Love me some Kristaps! If they trade him tonight, I tell you what, I'll help you chant 'Fire Phil'".

"They better keep the Unicorn in New York."

"Hey, did they trade Porzingis? Please tell me they didn't trade KP!"

These were some of the comments to come out of random conversations I had with complete and total strangers today as I rocked my Porzingis T-shirt jersey and some bright orange nike's. The move served as a therapeutic last ditch protesting effort to accentuating my (unfortunate) feelings for this basketball team representing this great and wonderful city. I'm with Porzingis.

The first comment was made by the spry female usher guiding me to my seat at the Barclay's Center. The second was a thirteen year old boy who stood behind me on the Will Call line sparking a conversation of angst, frustration, and disappointment with the team we chose to support in life. And the last one was a guy who stopped me a mere minutes away from my apartment building to catch up on what he might have missed. I didn't even know the guy.

This brings me to... 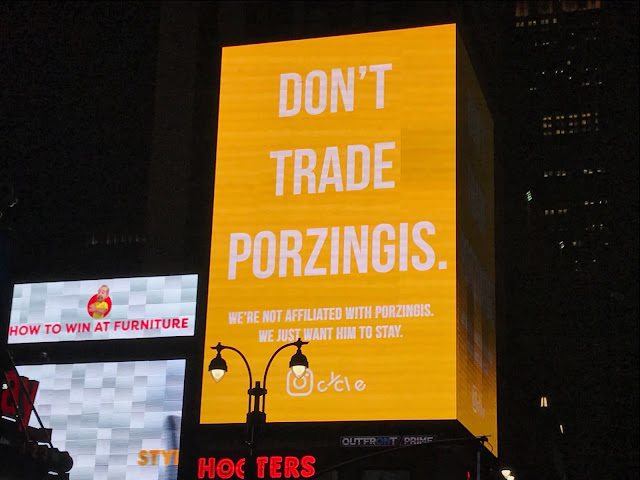 So yeah, you know I am a big fan of the Big Latvian. If you read this little blog frequently, you're well aware of this. But among all of this ridiculous "trade" talk by Phil Jackson and the Knicks organization, it's brought out an overwhelming support for the big fella. It's really been a long way since draft night when half of the fan base reacted to the Porzingis pick as if Isiah Thomas was announced as President of the franchise once again. ::shudders at that thought::::

By the way, speaking of the night Prozingis was picked, I sat two rows away from the father and son who became the poster-people in booing Porzingis that night - of course, they were donning KP jerseys and yes, seeking out cameras all night.

Such frauds. Such attention hounds. Sit down.

Regardless, there is definitely a swing towards Porzingis being this city's most beloved basketball player. 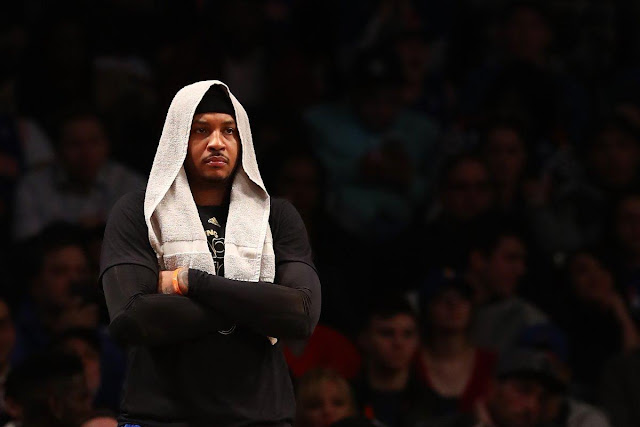 Truthfully, the Knicks fan in me would like Melo to indeed move on. I don't dislike the guy, but I'm just being real, this isn't working. It hasn't worked. And it won't work. I've learned over the years by seeing Melo play every night that he isn't a superstar. He's a really good player. He would('ve) be(en) a tremendous number two for a real Batman. But it all comes down to this -moving forward, I just don't see the Knicks winning with him.

With that said, I root for Melo getting every single dollar he was promised in that binding (and egrogious) contract. Melo wants New York City, and that makes me respect him. I for one hope he waits it out and gets what he deserves. Stupid deal, Phil, stupid deal.

You'll read it hear first, my prediction: The Knicks buy out Carmelo Anthony, and he ends up in Los Angeles with the Clippers. 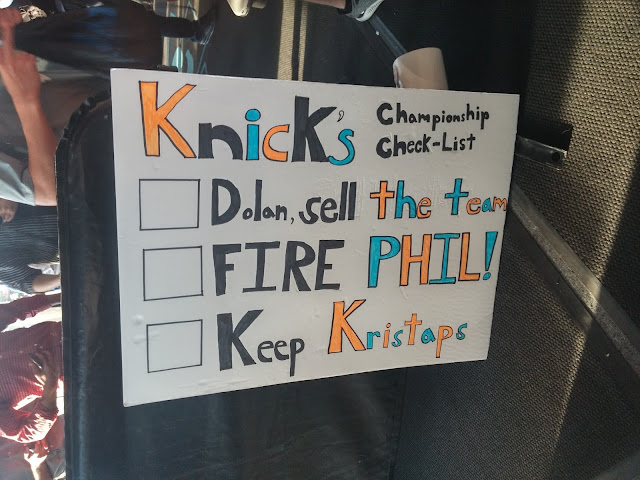 And of course there is Phil Jackson. I've had my fair share of rants on the Knicks over the years (show me a Knicks fan who hasn't), and when it comes down to Phil Jackson, my thoughts are this: he needs to go.

Phil Jackson has the nerve to tell fans that he and the team "know what they are doing". Phil was given cap room and roster flexibility upon coming in to build and form a team. I can list his moves and decisions and make a balance chart, but that would just frustrate and anger me. Summary: it's not good. The Wins-Loss record speaks for it self.

And so does Joakim Noah. Friggin Joakim Noah and that contract says volumes. Again Phil, you need to go.

Hearing today that he was asleep during prospect evaluations just doubles down on this belief.

But if you think that's bad...

Entering the ring is one of my favorites, DP Hall of Famer, James Dolan, who simply says to the whole situation, "hold my beer". 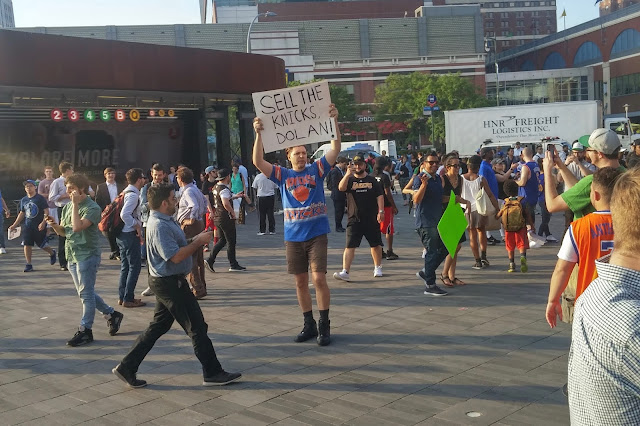 WE GOT A GIG TONIGHT, BOYS!

The irony in Knicks land right now is this: for years we've wanted James Dolan to stop medling in basketball affairs, and now, we kind of want him to step in. But Dolan doesn't possess leadership skills like that. So he extends Phil Jackson. Directs the media questions towards him to Phil. Which all means, he escapes the scrutiny, and can spend more time towards his band.

And on draft night, when most owners are in their team's war rooms attempting to get better, Jim Dolan skips the entire thing because his band has a gig tonight. Yes, take the second to re-read that last sentence.

The gift that keeps on giving. 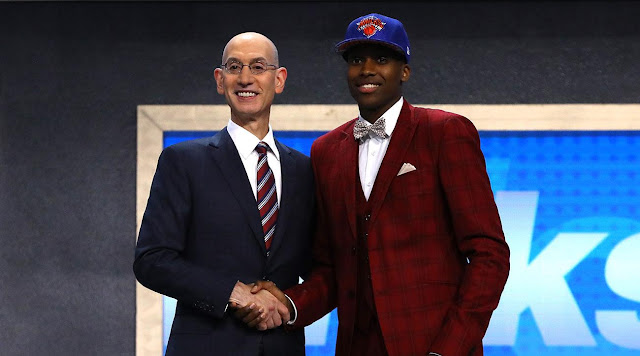 Well...if we use baseball logic. We're due when it comes to French players. #Knicks
— Dome Pondering (@DomePondering) June 23, 2017

As for the actual draft pick, I was pleased with it. To be honest, I don't know much about Frank Ntilikina. From my obsession with Draft Express, he seems decent, but doesn't everyone? It's hard to make an overwhelming case for him the way I did for Porzingis because, hello! - 7'3'' and can run, shoot, and put the ball on the floor. Sort of easy to believe in that.

In the arena, other Knicks fans were pleased. Maybe we learned our lesson on booing the foreign unknown. Maybe it's the fact that our best two players - Porzingis and Willy Hernangomez - are foreign. I don't know. I guess we'll see.

Though, I am selfishly hoping he becomes a mega superstar because: a) the obvious - he plays for my Knicks, and b) I would love to have that moment of being in the building when he was selected.

As for the other two picks - eh.

We're stashing a European point guard (see you later?) and drafted a sharpshooting two-guard who apparently has a sketchy past. But you know, it's about that triangle offense, yo! 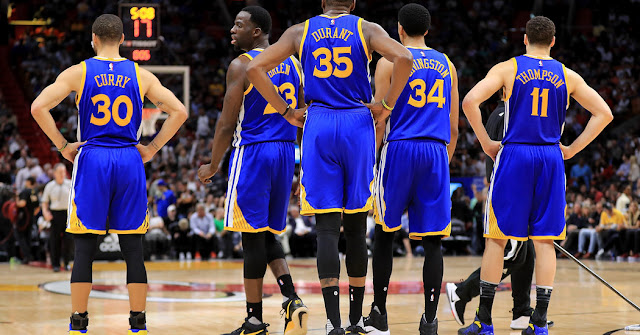 Even as I dissect and delve into my feelings on this entertaining night that involved my first NBA Draft experience, I just had this sobering thought...