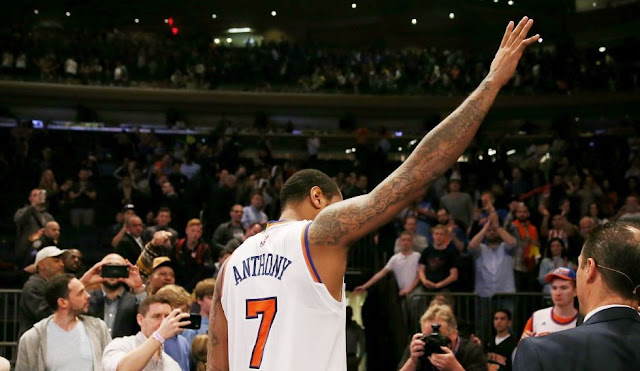 I've wanted this for the Knicks, and today I got it.

Carmelo Anthony is no longer a New York Knick heading into the 17-18 NBA Season.

No, I don't dislike Melo. In fact, if you go through previous posts you'll know, I find Melo to be a very, very good player. However, I just thought it was time for the Knicks to move past this era, and truly - like, really - rebuild.

Most importantly, build around Kristaps Porzingis.

But, again, for me, I've always - ALWAYS - believed that Carmelo Anthony needed to be the #2 (or #3) guy on a team. Watching him night in and night out as a Knick, he just never seemed to be the type of guy who lifts those around him. Again, he's a tremendous player but the track record is there. I don't buy into the "he's never had much around him" argument.

Have you seen the Knicks roster in comparison to the rest of the Eastern Conference the last few years?

Ultimately, we've lost with Carmelo Anthony on the roster for years. Now, it's time to move on.

I do think Melo is slightly overrated by the national media, and in respect, many fans as well. I do think he'll be great along side Russell Westbrook (a legitimate superstar in the NBA) and Paul George. He'll be, dare I say - Olympic Carmelo. Just catch and shoot. Which is a super dangerous Melo. Are they good enough to defeat the Warriors? No. No one is.

However, if I'm being honest, Melo's stint here in New York was star-crossed. If I had to describe it in one word it would be - disappointing. It really was. The Melo-Knicks relationship, all along, felt like two individuals who liked the idea of one another, rather than loving one another. Melo's stay here just never felt real. It always felt fabricated, right from the beginning with the facetious "I'm coming home video" for his debut. Melo's a Baltimore kid. Let's finally just say it.

And while management didn't exactly help him - or at times completely derailed him (see: Phil Jackson), Melo also didn't help himself. He ran Coach Mike D'Antoni out of the organization - the same coach he was angling to play for once again. Also, the same coach who is currently the NBA Coach of the Year.

How can we forget the pettiness shown during the height of Linsanity, and towards ending it?

There were the countless moments every night where Melo either took a bad shot, or simply gave no effort on the defensive end.

Or, how about that season he didn't suit up all year because of an injury, but played in the all-Star Game before shutting it down once again?

Oh, and there is the ball movement, or lack thereof. I definitely won't miss watching Melo hold...and hold...and hold the ball some more before going one on three on the right end of the block.

But you know what? I won't forget the unbelievable scoring ability he displayed in the blue and orange. Nor that infamous overtime win on Easter Sunday against the Chicago Bulls. Or my favorite Knicks Melo memory, his record-setting 63-point performance against the Charlotte Bobcats.

Yes, there has been good and bad. What it has been, is a truly interesting ride. One that most Knicks fan still can't describe. Regardless, it needed to come to an end, and it finally did. We're ready to hand it all over to The Unicorn.

Thanks Melo for proudly wearing the blue and orange. And really, I wish you all the best in Oklahoma City. Go play some meaningful basketball - a stage you should be on.

Overall, this relationship needed to end.