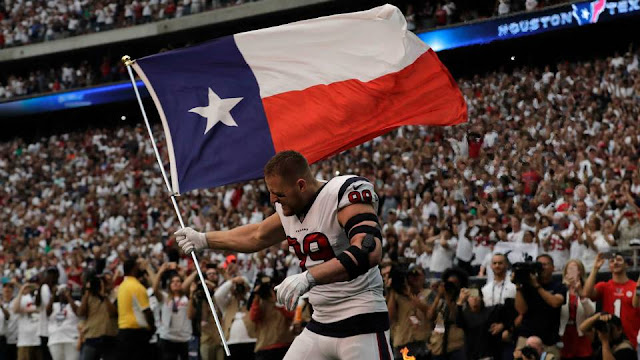 1. JJ Wyatt - Not only has the man raised over $37M for Hurricane Harvey relief, but unlike many of the various charities we have become accustomed to, Wyatt is very transparent in how he will spend the money, and what he plans to do. Still in such awe of this.

2. Tim Duncan - In the same spectrum as Wyatt is one of my favorite athletes, Tim Duncan. A native from the US Virgin Islands, Tim Duncan has been instrumental in Hurricane Irma relief by donating 20,000 pounds of food to the area. Such awesome stories in the midst of all these Natural disasters. The power of the human spirit is so great.

3. Cleveland Indians - 22 Baseball games in a row. The Indians record winning-streak came to an end  this week, but it is damn impressive. Are they NOT the choice to make it back to the World Series from the American League?

1. London Attacks - SMH on these terrorists attacks. My heart goes out to those affected by more senselessness in the world.

2. White House on Jemele Hill - Nothing like the White House using it's stage to call for the job of a person expressing her right to free speech. It's rather ridiculous to watch this administration's relationship with the media, and partially, anything that goes against it. Keep being you Jemele Hill.

3. Bobby "The Brain" Heenan - We all learned of the loss of Bobby Heenan today, and for this long time fan, it crushed me. He was not only a staple of my childhood and my early fandom in pro wrestling, but also one of my absolute favorites - ever. RIP Brain, you finally left us dumb humanoids.