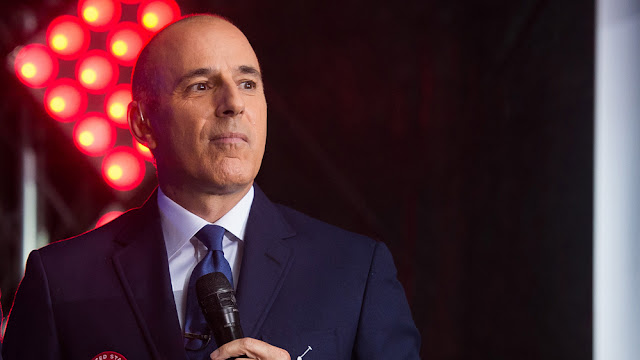 Why am I not surprised? This may come as a shock, but I've always found Matt Lauer to be a bit smug. I'm not sure what it was - maybe it was the tea leaves that could be read during the whole Ann Curry debacle - but the guy never emitted good vibes for me. And to be honest, I always found it rather questionable the amount of money ($20M per year!) he was being paid to anchor the TODAY show.

But really, what makes this all so hard and to take and comprehend are the details in the aftermath of it all. More so, the amount of damaging signs that were so incredibly available and known to those within NBC News. We've all read and heard the despicable actions that Lauer committed and imparted on the culture at NBC, but I've found it hard to believe that no one knew.

I understand that work cultures are difficult and dynamic, and often, the power of communication and politics is a vicious system to break. Especially when your job and career are at stake - and indirectly, your family. But, no one knew? Not senior executives? Not the person who signed off on Lauer asking for a button to be installed in his office? Nothing? No one in leadership had a conscience?


Even more heart breaking (and infuriating) is one woman who reported having sex with Lauer out of fear - out of FEAR! - for her job. Employees mentioned that Lauer's behavior "wasn't a secret". Which leads me - and you, and everyone else - to believe that NBC executives did everything they could to NOT ruffle the lucrative money tree currently in place until they had no choice to do so.

Look, it's easy to go on about the pervasive "boys culture" in most work places, and we all know it's true. Especially, us men who drive this culture that is so wrong. So, so wrong.

While Lauer deserves everything he is currently getting, including the absolute erasing of his legacy at NBC, I do believe there are many, many, many more who should be held responsible in this entire ordeal. The statements and actions are great, but it's time NBC answers questions about how so many in human resources, and how a huge giant in American business can cover up or ignore sexual assault and abuse of power by men within it.

Omission of challenging such a culture is just as guilty and immoral as those who continue this disgusting cycle.