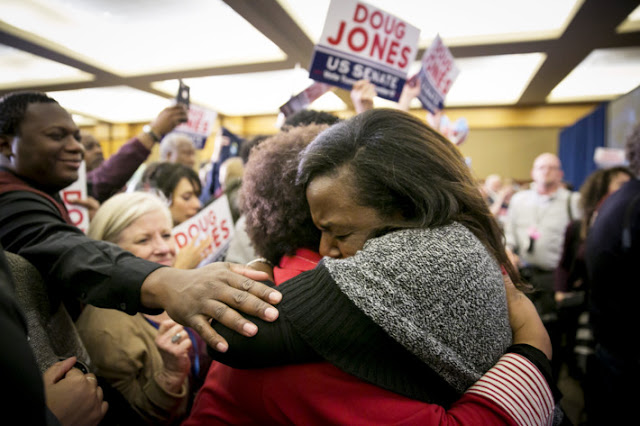 1. Black Women in Alabama - First, thank you. You saved us all from witnessing another downfall from decent standards in America. And of course, I hope this movement continues to move forward as there are many black women, if unified and mobilized, and seriously change many things in this country of ours.

2. Black Thought - Ok, so the 10 second freestyle this dude ripped off earlier this week was not only insanely talented, but he delivered some truth. Super impressive, you know, if you're into hip hop.

3. Giancarlo Stanton - Giving the new Yankee the nod here for his honest thoughts in his Yankee introduction. Some may not like it, but I found it refreshing, especially when much of what he said is something all baseball fans are aware of.

1. 49% in Alabama - While the Alabama victory was nice to see, as I stated in my post regarding the Doug Jones win, who in the world are these people STILL voting for Roy Moore? It just shows you the mindset that is still out there, and of course, still powerful.

2. Jerry Richardson - So, let me get this right. Colin Kaepernick, was pushed out of the league and is considered un-American by NFL Owners. Yet, now one of the NFL's owners, is selling his team, the Carolina Panthers, amidst strong allegations of sexual misconduct and racism. The NFL man...

3. Failed Terrorist Attempt - So, we made jokes about how it annoyed our commutes, but seriously, what if this went off as this man planned? So sick of terrorism, and these people who are looking to harm others. I can only dream of a world where this stuff is over.

1. Keaton Jones Video - First he was a sensation for being "bullied", then we learn he was in fact the one doing it, and much more. We also learned his mother is a white supremacist and that for some reason, they collected over $60K from a GoFundMe account. America is crazy.