How Did We Get Here?! - Thoughts on the Alabama Senate Race 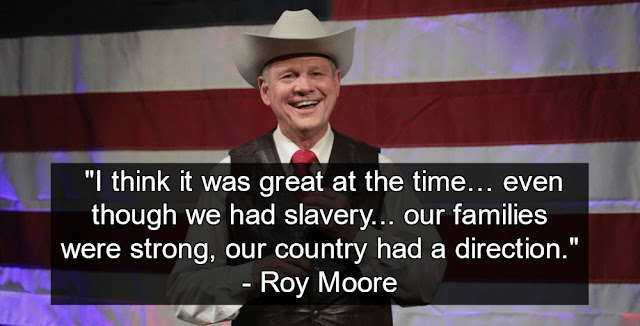 It's amazing to me that we've come to a point in our nation where the elected senate seat of Alabama - yes, Alabama - hinges on the complete and utter bottoming out of our values.

Alabama! Folks, in my best Allen Iverson impression - we're talking about Alabama! But here we all are, unified by the indecency and craziness that has occurred from Roy Moore, combined with the current reality (and penalty?) of what happens when we do not mobilize and take action for progress. Regardless, Doug Jones won the senate seat for Alabama. We can all exhale, at least for the next few days.

VOTE AGAINST THE BAD GUY

Truthfully, I'm not overjoyed, but more so, relieved. It's truly an awkward place to be. Rather, it's a feeling based in a greater sense in validating an understanding of avoiding the worst rather than truly even knowing who Doug Jones is. I'm pretty sure many are in line with place of being whether they line to admit it or not. Or at the very least, they are on the doorstep of that feeling.

As I always do - because I have to in today's hyper-politicized world - I don't really care for parties. In saying that, I didn't vote for Donald Trump, have tried to give him a chance upon his inauguration, and now, quite frankly, find him to be one of the worst things in my life as he sets this country back for many people - well, those who aren't white middle-aged men.

With that said, I find Roy Moore to be an extension of everything the current Trump administration to be - an unapologetic foundation of racism wrapped in divisiveness, privilege, false conservatism, and a poor - actually damaging - representation of Christ to the rest of the world. More on that in a bit.

But of course, even with Trump's ties aside, the details of Moore's past in preying on young girls, countless sexual misconduct offenses, his outlandish comments, and of course the recent quote of "even though we had slavery..." should be enough. Right? No? Well...

And then, of course, there was the rally. His wife's pathetic attempt and cry that he's hired people of all backgrounds, and that "one of their accountants is a jew" was comical. Translation aka, "He's not racist!". And we all know racists are the only ones who have to make that defense.

Regardless, it's sad when politics has reached a point of needing to rally and truly mobilize to KEEP the bad person OUT OF OFFICE, rather than voting for progressiveness. Modern day defensive politics is the worst.

RIDE OR DIE WITH MY CREW

I love Jesus. Yes, that's out there too. But, it has to be said that the evangelical world is about as guilty in ALL of this as anyone, if not more.

It's painful to watch many who claim their faith in the same breath as they support Moore during this entire ordeal (and Trump as well). Many, along these lines, who should be for redemption, in support of love, for kindness, for grace, and for basic humanity, are holding onto a party that currently does not instill or value those tentpoles.

Truthfully - I once admired the Republican party for such values. For keeping families and faith at the center of their thinking.

Today I see too many people I know - even people I care about - attempt to defend the sway from that foundation that once lived in the Republican party with claims of "mainstream media" (aren't all media today "mainstream"?), "Fake News", or whatever else, as misdirection. All in total denial of what is happening.

For some, it's all they know. For others, they just don't like change. And then, there are a few to connect their political affiliation and their faith as if "thou shall vote Republican" is written in the good word.

For me, I use the following as a guideline in my disappointment with the republican party: how can I find solace in a party that claims to value "pro life" based in faith-based foundations when that same party demeans and attempts to invalidate the lives and experiences of black people, women, and other underrepresented people in this nation? Or even, overlook sexual misconduct? And now recently, Moore's predatory past? It doesn't make sense to me - at all.

But, we've reached a point in identity politics in which party ties are stronger than everything. The Christian community has drastically lowered it's standards because of changes they are uncomfortable with - and most importantly, in which white evangelicals are afraid of.

By the way, give Peter Whener's Op-Ed from the New York Times a read on this topic. Very profound. 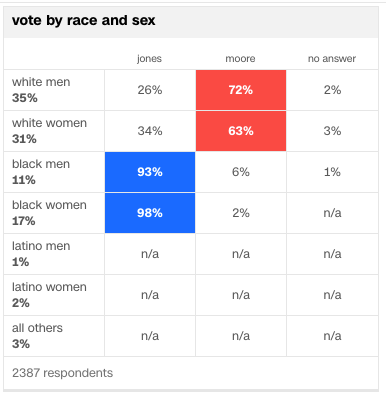 Look at those numbers!

First, if you don't think Alabama is still segregated in various ways, think again. Sure water fountains can be shared, but mindset is everything.

Second, kudos to Charles Barkley for everything he did this week to get people to the polls in his home state. And we're talking many of those who often think their votes don't count or matter, or simply, in areas where they make it difficult to vote.

In Alabama today, confirmed reports of:

THESE ARE ALL FORMS OF VOTER SUPPRESSION.
— Mikel Jollett (@Mikel_Jollett) December 12, 2017

Third, how fired up were black women to head to the poles?

And, fourth, isn't this a true representation of how powerful and impactful communities can be if mobilized and motivated? I don't want to hear the, "my vote doesn't matter" rhetoric. Tired of it.

I really believe the current administration as reignited a political movement, and has engaged many who haven't been before. We'll see...

And finally, despite the overwhelming turnout for black voters in Alabama, the VERY thought I keept having after the announcement was this - WHY IS THIS SO CLOSE?

Even as my wife and I watched the coverage and broke it up with some lighthearted television, I kept thinking, how did we get here?!

This race was only separated by 22,000 voters! And by 1.5%! Again, these are results in a race where one participant was EVERYTHING Roy Moore is, and yet, he JUST lost at a finish line.

It's so very head scratching.

Regardless, there is no progress without struggle. I guess the win can just be taken as is - a big victory in curtailing what has been an interesting rising in 2017. Yet, it's quite the eye-opener to what is still in play in these United States. 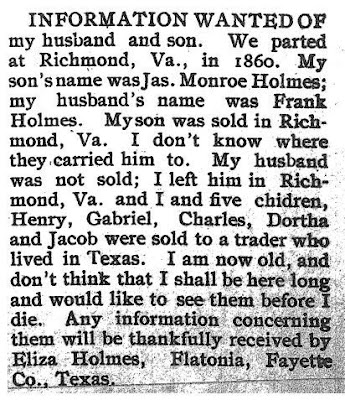 After all, "even though we had slavery..."