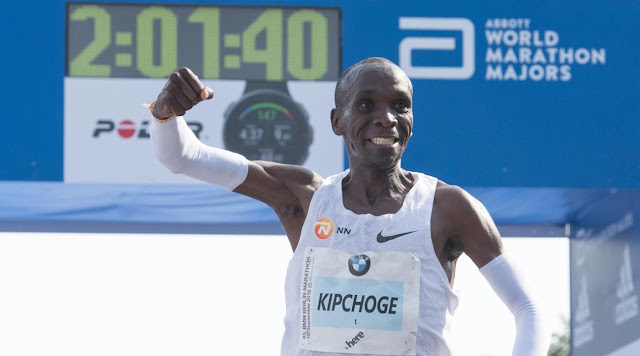 1. Eluide Kipchoge - I'm always impressed with any running feat. But come on! This dude just broke the World record for not just any running feat - for a freakin marathon! He finished the Berlin Marathon in 2 hours 1 Minute and 39 seconds!! Kipchoge ran his first 10 kilometers in 29:21! That's just insane. So insane.

2. John Legend - Props this dude for completing the EGOT, and of course, becoming the first black person to do so. That is some big time, historical, accomplishment-stuff.

3. Tiger Woods - Do I care about golf? Not really. Not even when Woods was in his prime. Yet, who doesn't love a great comeback sports story? I'm still not OK with how he treated his ex-wife, but I'm always up for a redemption story. I do like seeing people rebound.

1. Florence Death Toll - With the numbers rising as the days go by, it's a shame to see the aftermath of such a storm in the Carolinas. Here is to hoping we can get help to the region sufficiently.

2. Kavanaugh Accusers - You know how bad politics are now? We question the timing of sexual assault victims' when they come forward. Unbelievable. Why does that matter? And of course, many are wondering, why now? Well, you know what, I would want to know NOW whether we give some pretty heavy power to a scumbag. This is THAT TIME to get it all out there. He might be innocent. He might be guilty. But I do want to know what kind of integrity we are dealing with.

3. Players Asking for Trades - I know player movement is now an integral part of the entertainment in sports, especially the NBA, but this recent trade ask by Jimmy Butler is ridiculous. Prep yourself for an old man comment on sports - I miss when players stayed with an organization and made it theirs. The "lets team up" positioning has gotten old for me. Of course, the second it benefits my Knicks I'll be flipping on this feeling ASAP. Heck, I'll just get it out of the way now...

3a. My Future Hypocrisy - See above.